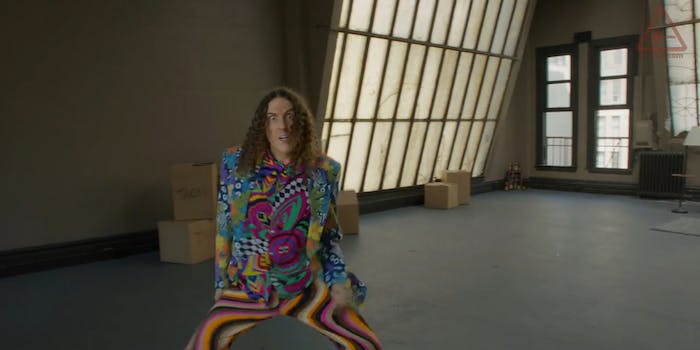 Last month, Yankovic announced that he would be releasing a music video everyday for eight days for his upcoming 14th album, Mandatory Fun. He teamed up with Nerdist to release the first of those videos on Monday, which takes on Pharrell’s overplayed megahit.

“Tacky” is a look at all of the tasteless things we wear and do, and it’s full of celebrity cameos from Aisha Tyler, Margaret Cho, and Kristen Schaal, among others. If this is what the next seven days will be like, then we’re in for an excellent week.

Mandatory Fun comes out on Tuesday, and while there’s no official word on most of the lineup, he is doing a grammar parody of “Blurred Lines.”

Yankovic, who’s been making music parodies for about 30 years, noted that he wanted to celebrate what is “ostensibly my last album” in a big way.

“I wanted a video to go viral for an entire day and have people talk about that video, and then the next day they’re talking about a new video,” he told NPR. “I just thought that would be a really fun way to do it, to make a big deal out of release week.”

He’s already off to a fantastic start.