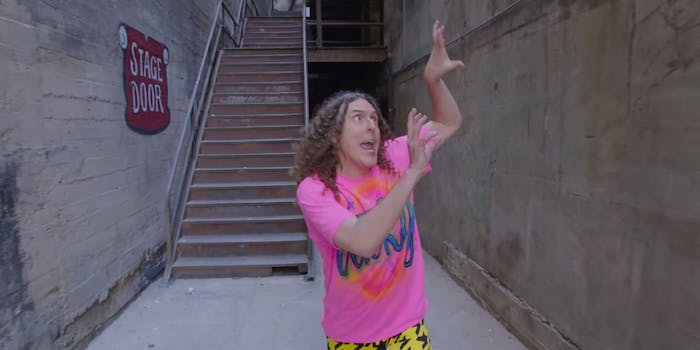 The Eight Days of "Weird Al" Yankovic brought us many gifts.

And on the eighth day of ‘Weird Al’ Yankovic, we got one final video.

The past eight days have brought us more Yankovic than we’ve had in years. It’s been one giant promotional tool for his 14th studio album, Mandatory Fun, and we’ve seen the music videos, which have ranged from a stop-motion animation on lame celebrity culture to a single take full of celebrity cameos and an original “Blurred Lines” parody over a year after the original. When we first saw his tweet, we had no idea what to expect.

Yep, I have 8 brand new music videos, and I’ll be premiering one EVERY SINGLE DAY starting July 14! #8videos8days #MandatoryFun

But now it’s turned into a cultural event, as we collectively waited to see what the next video would be and where it would premiere. It was a huge win for the Yankovic promotional juggernaut, but it was also like a holiday for the eager audience who lapped it all up.

Even when it seemed that we were suffering from a bit of Weird Al fatigue, Yankovic proved that he’s still at the top of his game—despite having seemingly the entirety of YouTube to compete with in making parodies. But in case you’ve missed any of them, we’ve got them all here, and ranked. Now that we’ve effectively received two-thirds of Mandatory Fun in music video form, you might as well buy just the album and help launch him to the top of the Billboard 200.

“Blurred Lines” was arguably the biggest song of summer 2013, so Yankovic had the challenge of making the song relevant again while avoiding what other parody artists on YouTube have already done with it. He succeeded and created a grammatically correct song that grammar nerds and even the most stringent of copy editors can enjoy.

However, even Yankovic’s version of “Blurred Lines” wasn’t without its controversy. The song contains the word “spastic,” which is considered a slur against people with disabilities. Yankovic, not having realized this earlier, took to Twitter to apologize.

If you thought I didn’t know that I ended “Word Crimes” with a split infinitive… you don’t give me nearly enough credit.

If you thought I didn’t know that “spastic” is considered a highly offensive slur by some people… you’re right, I didn’t. Deeply sorry.

Yankovic ended his eight days of videos with “Mission Statement,” which parodies Crosby, Stills & Nash’s “Suite: Judy Blue Eyes.” It’s a song that Graham Nash himself has been waiting for for years, and it almost makes you forget that you’re listening to a song all about corporate jargon.

And if it introduces a younger generation to Crosby, Stills & Nash, then Yankovic has more than done his job.

Packed to the brim with bright colors, wacky patterns, and celebrity cameos, Yankovic’s first hit will get stuck in your head as easily as the original did … and maybe, just maybe, make you want to put on a tacky sweater.

What first looked like a sequel to The Food Album twisted itself on its head by the second verse with a tip of the aluminum foil hat to one of everyone’s favorite conspiracies on the Internet. If you didn’t like “Royals” before, you probably found yourself liking it now.

You’ve got to give Yankovic credit for keeping up with the speed of Iggy Azalea’s rapping as he turns a simple concept into a song big enough to fill up a toolshed of supplies.

An ode to every college and high school fight song, this hit captures the general gist of any sports game for those who don’t understand what’s going on, all while including just enough nostalgia for those who’ve played in the game, been in the stands, or marched down there on the field.

Our obsession with celebrity culture is front and center in “Lame Claim to Fame,” a stop-motion music video in the form of a scrapbook. Don’t miss the name-drop of Dr. Demento, who first brought Yankovic to a larger audience in his early days.

Yankovic is more focused on paying homage a style than a specific song with “First World Problems” as he calls out the inane things we complain about in our everyday lives in the style of Pixies.