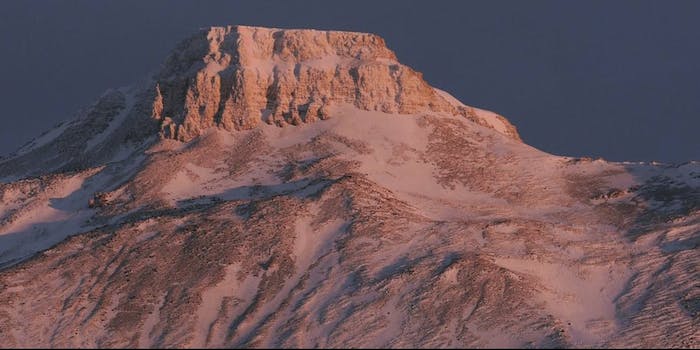 Short film ‘The Weight of Mountains’ makes geology into poetry

"All the good and evil things that happen in the world are of no consequence to the magnitude of their scale."

Haven’t you ever wondered whether mountains are sentient? Whether swathed in green trees or bearing sharp spires of rock, mountains are inspiring, imposing figures on the landscape.

Now you can meditate on the birth, growth, and death of some of these most striking geological formations through an incredible video. Let the beautiful images, a hypnotic British narrator, and stirring writing take you away:

Mountains: “They are beautiful in their immensity and all the good and evil things that happen in the world are of no consequence to the magnitude of their scale.”

When the name for the birth of mountains is the stately sounding “orogenesis,” perhaps one can’t help but be inspired.

The video’s Vimeo page explains that the film is based on work by British geographer L. Dudley Stamp. The filmmaker, Temujin Doran of Studiocanoe, makes this work into epic poetry. Wind, water, ice, and gravity all sculpt mountains, as we know. Plants and animals (humans included) also play their role. But somehow, the video translates these basic facts into something sublime. And in the shots, the mountains themselves dwarf the life surrounding them.

The film was shot in Iceland and created as part of The Weight of Mountains filmmaker residency program, which is “a project to explore our humanity within the throws of the vast, overwhelming expanse of our surrounding environments.”

This film was posted about six months ago. However, it’s seen a recent resurgence after having been recently featured on The Science Studio, a curated collection of the best science multimedia on the Web. For more inspiration and wonder, definitely check out that collection.