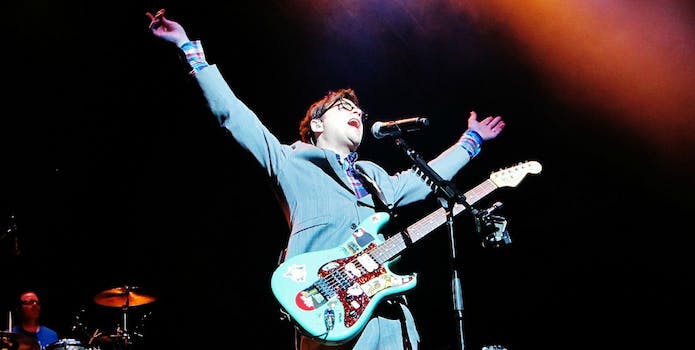 Say it ain't so, Rivers.

When you’re a huge rock star—albeit one from several decades ago—it’s imperative to find motivation and inspiration in everyday life.

Some get it from wanting to replace the guy who served as the wallpaper in their bedroom, others want to recreate their lives as Vikings who come from the land of the ice and snow, and others hunger to warn us about youngsters who have run amok.

But others just want to get on Tinder.

Such was the case for Weezer frontman Rivers Cuomo, who told Rolling Stone that he joined the dating app to seek inspiration for songs for the band’s new album.

As the magazine explained, Cuomo observed producer Jake Sinclair using Tinder to find women and “became fascinated by the concept.” So he joined as well.

“My description says, ‘Not looking to hook up, just trying to have new experiences and get some ideas for songs,'” said Cuomo, who’s married but interested in meeting men and women for platonic friendships and experience. “I’m not super excited to talk to people who know that I’m in Weezer. It’s more exciting when I find people that are interested in me as a person. When I’m in a city I’m not totally familiar with, I can meet someone on Tinder and they can take me around.”

Said Sinclair: “I knew there was zero chance of him hooking up with anybody. But he started constantly getting out of the house and writing down all the details of what happened to him.”

Whether that helps Weezer produce a significant album 22 years after its breakthrough work The Blue Album is a different story. But perhaps it’s worth exploring whether sites like OkCupid, Ashley Madison, and JDate could help other musicians search for ideas and find new ways to create songs.

As for what his wife thinks about his life on Tinder? “My wife,” Cuomo said, “is cool with it.”

Photo via remixyourface/Flickr (CC BY 2.0)