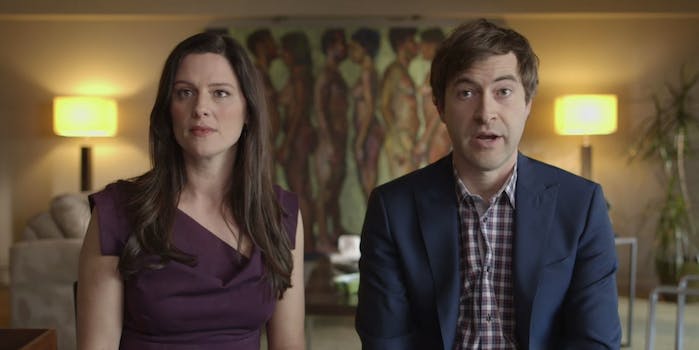 ‘Wedlock’ is the only couples therapy we need

With the minor exception of Jennifer Lafleur playing a small role in the Duplass Brothers’ Baghead, we’ve never had a chance to see the result of mixing the schools of the Upright Citizens Brigade and mumblecore together in a bottle, shaking that bottle up, and then hurling it at an oncoming semi truck. Wedlock is that very chance, and the result is a raw, hyper brand of comedy that is a rare find offstage, delivered in easily digestible portions via its webseries format.

The high-concept series revolves around two longtime best friends, Dave (Mark Duplass) and Fiona (Lafleur) attempting to fall in love with each other under the guidance of couples’ therapist Dr. Jay (Rob Corddry)… despite their utter lack of any chemistry whatsoever and the fact that Fiona is almost certainly only attracted to women. Each episode (ranging in length between five and six minutes) is a different therapy session, and each therapy session plays like its own improv game, with the couple taking the design of their sessions into their own hands and bringing each one to freshly absurd heights.

Lafleur and Duplass make for an all-time great comedy duo, their respective Fiona and Dave perfectly embodying the most awful, annoying people to conceivably be around but the absolute best people to watch. It’s great to see these two have a chance to go completely unhinged; Lafleur and Duplass usually play things dry and sardonic, and they do it very well, but here they are manically optimistic, constantly bouncing off the walls like the children you point to whenever somebody says ADHD doesn’t exist. They’re clearly having a blast, and, somewhere on editor Christopher Donlon’s hard drive, there must be at least 12 hours of both of them cracking up.

Corddry is an excellent everyman on the other side of the table, rarely getting a word into the sessions, but upping the comedic element of any given moment by 50 percent with a mere cutaway to his facial expression. As the series progresses and his sanity wanes, he gets a few chances at becoming unhinged himself (and an extremely angry Corddry is a wonderful thing), but, for the most part, he’s reminding us how it feels to be stuck in close quarters with people like this.

Other notable appearances throughout the 10 episodes include turns from Katie Aselton (from Team Mumblecore) as Candace, the ex-girlfriend of both Dave and Fiona who is visibly still in love with Fiona, and Ed Begley Jr. as a character inexplicably named Ray Gomez, a colleague of Dr. Jay who gives him advice during a few of the show’s cold opens. They don’t get a lot of screen time, but they make what’s there count, with Aselton getting to partake in a song with Lafleur and Duplass about Dave and Fiona’s identical orgasm sound (it’s like a dying cat), and Ed Begley Jr. getting to scream “PUSH THEM!” at Dr. Jay, which I hope somebody is working on a GIF of.

The series can be found on Vimeo on Demand for 99 cents an episode, or $3.99 for the whole lot of 10. It was directed by Ross Partridge (who starred in Baghead, directed a play starring Lafleur in 2005 that Jay Duplass attended, and seems to be the connective issue behind this group getting together), written by UCB alum Josh Perilo, and beautifully shot by Doug Emmett (who also shot the wonderful-looking The Giant Mechanical Man and Paranormal Activity 4, which probably paid very well). If you’re a comedy junkie, it’s well worth the price of admission; you’ll watch through it at least three times. If you’re not, just wait until a friend that is forces you to watch it with them, because it’s only a matter of time.