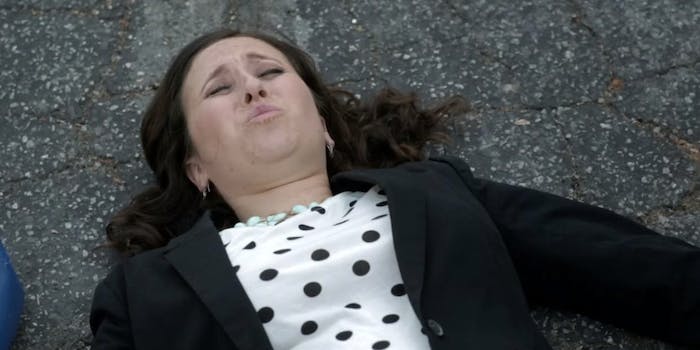 How actors are using Web festivals to launch careers

The webseries genre has become more than a mere launching pad for the next great YouTube sensation or farm system for potential network sitcoms.

Actors, writers, and directors who take advantage of online video’s frictionless distribution are increasingly using their original content to make a name for themselves and showcase their talents. For the price of a set of glossy head shots, an emerging talent struggling to find an agent can shoot a three-part Web comedy as part of a digital résumé.

For actors such as Becky Kramer and Ezie Colter, webseries are part of a means to an end. While their backgrounds are vastly different, their paths have followed a similar trajectory. Their online shows—Jewvangelist and Crew—have gained the attention of leading Web festivals which, in turn, has given their careers a shot of adrenaline.

Kramer’s series—the trials and tribulations of a female rabbi trying to save her congregation—scored a nomination at the Indie Series Awards for best comedy series, with Kramer nominated for best lead actress in a comedy. The satirical comedy also was selected for screening at the Hollyweb festival. Crew—the story of a New York-area crime family—has won past awards at the LA Webfest and the Rome Web Awards. For 2015, the series and its actors are again nominated for awards at the April L.A. event.

For New Jersey native Ezie Cotler, his nomination for outstanding lead actor in a dramatic series for Crew is a first, and it represents the fact that he has made it as a professional actor. While his compensation still requires him to take on some side jobs, being noticed by peers—not to mention TV networks and film studios—is priceless.

“We are players in the world,” Cotler told the Daily Dot of his reaction to the LA Webfest honor. “I am excited to be recognized as a professional actor, and I’d like to parlay that achievement into something tangible.”

While money is not rolling in, Cotler added, attending Web festivals has led to some connections and projects outside of Crew. He is working on a webseries on medical marijuana as well as producing a pilot for a new cooking show. The young actor hopes that his visibility at the upcoming L.A. showcase will put him (and his series) in the spotlight.

“It’s all about laying the groundwork,” the actor said. “From the day I have auditioned until now, I have gained a lot of ground.”

Becky Kramer found herself new to Los Angeles at age 30, embarking on an acting career relatively late compared to the competition. When facing the age-old question “What do you do when you can’t find an agent?” she found a simple answer: Make a webseries.

“Until I made Jewvangelist, I had only ever acted,” Kramer said in a recent interview. “I got frustrated because no one paid attention to me. I did not have a vehicle to showcase my talent.”

Kramer paid her dues acting in student films, and it was there she met Kaitlin Walsh (at the time studying at Chapman University) who became the budding actress’ producer, turning the kernel of an idea into Jewvangelist. The narrative of the series deals with a fictional female rabbi at a synagogue struggling to stay afloat. In order to bring new members into the temple, Rabbi Leah Levy has to become an evangelist, something generally uncommon in the Jewish religion. Kramer said her upbringing as a Jew living in Florida was helpful in adding authenticity to the show.

In the fall of 2013, Kramer took to Kickstarter with the intent on raising $5,000, but she was fortunate enough to bring in almost twice that amount. “We had enough left over after filming to enter some Web festivals,” she said.

The generally clever webseries has received modest attention by fans on YouTube, with only 299 subscribers, but the show has given Kramer the ability to create two demo reels (one for comedy, one for drama) which allowed her to land an agent last December. In addition to helping secure some roles that will help her pay the rent, she hopes the publicity her series gets at the upcoming LA Webfest grabs the attention of network studio sorts. The actor-comedian believes there’s a spot for her concept on primetime.

As with other actors whose careers included waiting tables and driving limos, Kramer has done what it takes to survive in Hollywood. She works part-time as the office manager at a coffee roaster and patrols thrift stores in search of rare china she can resell.

“We live in this age where anyone can get a camera, make a show put it on the Internet,” Kramer said. And while not every YouTube series leads to instant fame and fortune, an online presence can be just the right spark to ignite the careers of a new generation of digital talent.