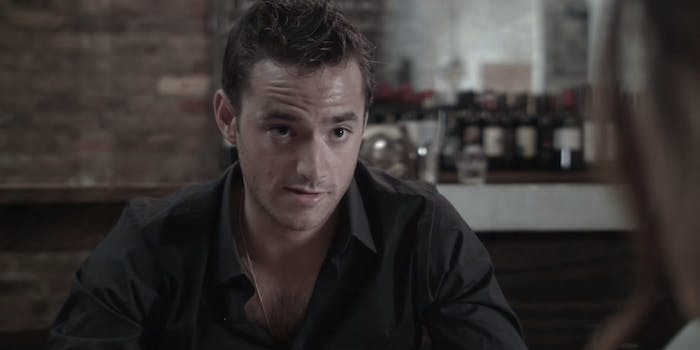 Swipe right for this Tinder-inspired webseries

Surprisingly, creator Connor Hines' firsthand knowledge of the app is next to nil.

To some, Tinder has a pretty questionable legacy. If it isn’t ruining the self-esteem of girls, or killing off romance, it’s inspiring predictable, drawn-out parodies. But now (awesome hookups aside), Tinder finally has something great going for it. Local Attraction is the creation of Connor Hines, who writes, directs, and stars in the webseries, a comedic re-creation of awkward Tinder first dates.

It’s this awkwardness that has been the focus of most of the series’ attention, but it feels as if that glosses over its unique point of view. Any first date, whether organized through friends or hot on the heels of a Hollywood meet-cute, faces the potential of disaster. But in Local Attraction, we see the motivations of those who use these apps, and although amplified for comedic purposes, the tension when those motivations clash.

We meet Trent, a banker, who, tired of the women who can “smell that short stack of Benjamins in my pocket,” likes Tinder for the control that it gives him—that ability to be in the driver’s seat, allowing him to “meet who you want to meet on your terms, based on their looks. And that authenticity … that’s rare.”

It’s comedic, and Trent is the obnoxious butt of the joke, but although he’s shallow, he’s at least transparent. His date Maeve’s facile reason that she “guess[ed] I thought it’d be fun … You never know who you’re going to meet” doesn’t stand up to scrutiny, as we know full well she’s only here because she fancied a photo on her phone. Her moral superiority, which grows as Trent becomes more and more unbearable, is built on her denial of this.

So solid is Local Attraction’s grasp of the tensions of initial Tinder dates that it is surprising that Hines’ firsthand knowledge of the app is next to zero. “I’ve never used it. My friends’ experiences gave me the inspiration,” he says (failing to mention that these are the sort of friends who go on what what feels like “twelve Tinder dates a week”). “I couldn’t use Tinder because I need a mutual friend to confirm I’m not getting a drink with a crazy person. I feel much better when it’s set up through people I know.”

Even so, he has noticed how the app has caused a shift in the dating landscape. “We’ve all become so much more accessible to one another, and therefore some pressure is slightly alleviated by the fact that we can just swipe to our next date instantaneously if one doesn’t go well. It’s constant and endless.”

With the success of the series’ Kickstarter project—it’s raised two and a half times its goal with 23 days to go—it now looks likely that Local Attraction will extend beyond its current three episodes. For now, Hines envisions it as an eight-episode series, but he remains open to the series’ future after that “so long as it serves as a professional stepping stone without jeopardizing the format.” Let’s hope it does, because currently it’s the funniest depiction of dating you’re likely to see.