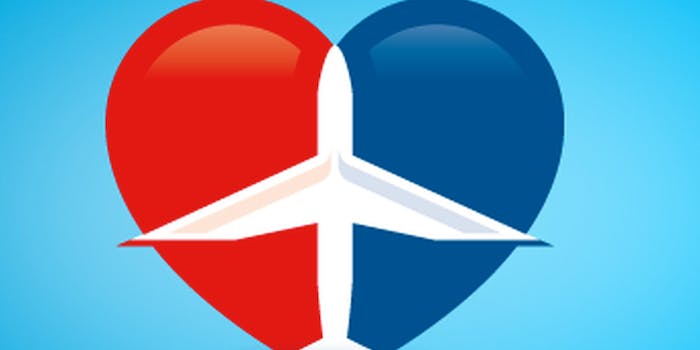 An alternate route to the Mile High Club

We Met on a Plane helps fellow travelers hook back up long after leaving the tarmac.

Were you hoping to join the mile high club but could not quite land the deal? A new website called We Met on a Plane hopes to help your pathetic self and change that.

It’s touted as a place to “search, find and connect with that special someone,” because there’s nothing hotter than seeing someone flip through SkyMall while they burp on the sodium-filled meal.

We Met on a Plane works by allowing each user to enter his or her flight number, time, origin, and destination city. The site, which sounds a lot like KLM’s attempt to match passengers together, searches through its “database” to find stories from that flight and displays similar matches. If you recognize a match, post a reply, and the site will email the intended recipient.

If you’re bored of reading Craigslist’s missed connections sections, We Met on a Plane features stories for public ridicule, though only a few have been posted to date. One story from earlier this month wittily described their missed connection by telling a terrorism joke (topical!) at a security checkpoint. The writer goes on to say he should file a “restraining order” because his potential suitor followed him into his boarding zone.

On that note, the Hater departs for San Francisco tomorrow. So the Daily Dot will be sure to give this site a pilot run.

Photo by We Met on a Plane