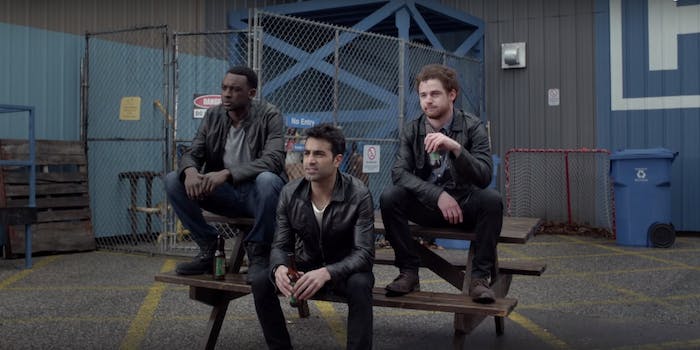 ‘We Are Disorderly,’ from ‘Degrassi’ alumni, escapes the cliche of buddy comedies

We Are Disorderly—a Canadian comedy webseries based around three good-natured friends—might sound like a thousand other things begging for your attention on the Web, but it has a patience and geniality that makes it more Mario Lemieux than Ben Johnson.

There was big news in the Great White North this week. In the biggest concentration of Canadian creative talent since the awkward, star-crossed nuptials of Deryck Whibley and Avril Lavigne, there was a reunion of the cast of Degrassi: The Next Generation. And in case your copy of the Toronto Star was carried off by the neighbor’s dog, here is the photo that got everybody agog:

It was a #Degrassi reunion tonight at the screening for the hilarious new web series @wearedisorderly. 💜 pic.twitter.com/BquAV3a9FO

That’s right: Even Drake was able to find time out of his day of well-publicized feuds and turning marketing experts into monosyllabic morons to venture right back to the bottom to reminisce about his CTV days.

But lost in all the hubbub was the actual reason that he was there—to support a couple of fellow Degrassi alums at the launch of their new webseries. Which is a shame because We Are Disorderly is as good as anything you’ll find in the genre.

The setup for the series is as conventional as they come: Three male friends—creators and writers Al Mukadam, Mazin Elsadig, and Jonathan Malen—who work and live together, try to have fun together. But whereas a lesser series would contrive a harried narrative across the episodes, We Are Disorderly uses it as a launching point for self-contained meditations on relationships, ownership, and self-worth.

All of which sounds decidedly unfunny. But when combined with the patient direction of Samir Rehem (who along with Mukadam and Elsadig worked on Degrassi) and a belief that their jokes are strong and don’t need every kitchen-sink embellishment, you get a terribly engaging series that highlights the talent and amiability of its stars. Too often webseries feel the need to cram as many ideas as possible into their short running times, yielding an erratic flow and no room for characters to emerge. That mistake is not made here.

Look no further than episode 2, “Our Girlfriend,” which orbits around one central premise—that there are three essential parts to a relationship—and you have a platform from which to launch humor that is not just structurally sound but also wise. By underpinning each episode with such a fundamental truth, you escape from the awful cliche of buddy comedies (where one is inevitably the stoner, one is the uptight jobsworth, and one is the one who wants to “make it” but never will) and produce work that is not just cheerful but also has something to say.

That We Are Disorderly looks so good and feels so confident in its direction is not really a surprise. Nor is the perception that it’s a repository for Degrassi talent. It is produced by the same company, and you might imagine that they would have bigger plans for it. The cast even have fun with this, name-checking the girls-done-good tale of Broad City and exploring viral content with the help of that human garbage disposal, Shoenice. And if the quality were to remain consistent in a 22-minute format, then it would be hard to begrudge it a slot on CTV.

H/T The Wrap | Screengrab via We Are Disorderly/YouTube