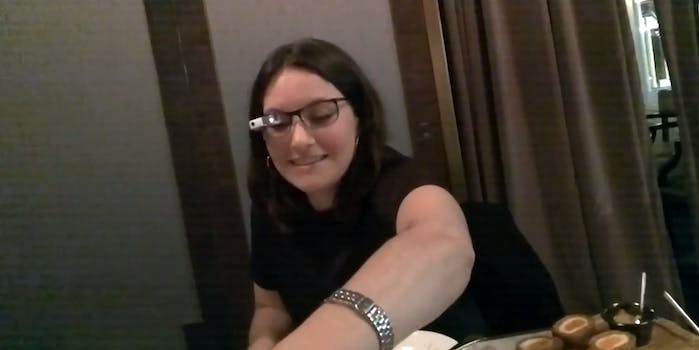 Screengrab from Watch Me Date/YouTube

Creep on a Google Glass date with webseries ‘Watch Me Date’

Watch me watch you humiliate yourself.

How would you feel if someone showed up to a date wearing Google Glass? Hopefully you’d be disgusted and a little bit disappointed that you’d been set up with such a dork. If both parties turned up with those things on their faces, you might expect a scene akin to this.

This is the setup for the Guardian‘s new webseries, Watch Me Date, without the lasers. By prominently wearing a device that perfectly illustrates the emptiness of existence, those involved can bond over their mutual lack of self-awareness. In this series, we see people you could actually imagine wearing Google Glass on a real blind date: a loser, a fame-hungry sociopath who hams it up for the camera, and 30-year-old blank slates still just content to go along for the ride.

Andy, the aforementioned loser, is up first. He meets Flo and, in announcing that “London can be quite lonely,” squarely places the blame for his romantic incompetence on the city’s 8 million other inhabitants. He’s depressing—he spends his day cold-calling people for charity donations—and you can imagine he’s the type who’d go home and re-watch footage of the moment he wanted to ask for Flo’s number but didn’t.

You wouldn’t want to be Ian and Sarah, either. He immediately crows that he’s already posted a selfie (“hashtag cyborgtime!”) and she places sneakers oddly high on her list of man criteria, yet rhymes Nike with bike. At least they have some fun in their shared gormlessness.

They reveal post-date that they did end up getting it on (although we don’t get to see split-screen footage of their Glass clanking together), despite Ian’s serious advice that you should bring a black garbage bag to a restaurant for your coat “so it won’t smell of curry.” To most, the idea of someone stowing their jacket under the table in a knotted plastic bin liner would be a deal-breaker. Sarah gives him a “seven out of 10… yeah, I fancied him.”

It’s easy to dismiss this series as a bit of fluff, but such a view does it a slight disservice. Would Andy be so pathetic and Sarah so accommodating of strange behavior if they were being filmed in a traditional way? Would Ian have modified his boorish personality if there was a large camera and boom stuck in his face?

It’s a credit to the technology (and also somewhat scary) that despite how dreadful Google Glass looks, people seem very quick to forget that it’s there and they’re being filmed, thus shedding any additional performative layer brought about by the knowledge that all your moves are being recorded.

It’s a mystery as to whether this makes any difference to the alveolated participants of Watch Me Date—I fancy that Andy would confess to anyone who would talk to him that he became a vegetarian “for brief amounts of time” because of Morrissey—but for everyone else, it raises queries as to how such devices could modulate communication and relationships in the future.

Screengrab via Watch Me Date/YouTube