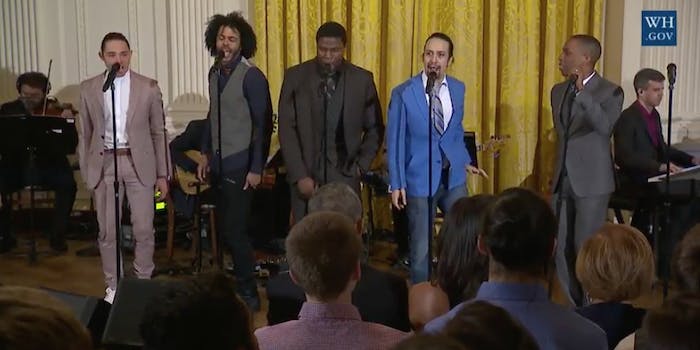 Obama is dealing with some angry fans after the White House's 'Hamilton' stream cut out after two songs.

If you can’t get a ticket to Hamilton (who can?), you can still catch some of it online, thanks to President Obama.

Hamilton’s cast is performing for Obama in an event fans have dubbed #Bam4Ham, and video of the event will go up on WhiteHouse.gov after it’s over.

Hamilton got an early start at the White House in 2009 with a performance of a draft of the first song at a Poetry & Spoken Word event.

Today’s event is not a full performance, just selections, and there are no costumes or setpieces. Despite Obama saying the event was to “share this incredible musical with folks who might otherwise not get the experience,” the audience trying to livestream the event on the White House’s YouTube channel definitely felt shut out when it abruptly cut off after only a couple songs. The clip went to a blue screen, then announced the event had concluded, at least for unhappy digital fans.

WAIT WHERE DID THE STREAM GO WHY IS THIS HAPPENING #Bam4Ham

…that can't be it. IT CAN'T BE OVER ALREADY WTF #Bam4Ham

@SheenaBoekweg If it is that was such a cruel tease :( #Bam4Ham

Right?! I PAY MY TAXES DAMNIT, THE LEAST YOU CAN GIVE ME IS MY #Bam4Ham LIVEFFED!!!! https://t.co/SyA8knCslE

They cut off #Bam4Ham after 2 songs? What else are my taxes going towards @POTUS?

Anyway, I’m just gonna stare at this blue screen on my computer until it sings “Hamilton” to me again.

Ending this livestream after only two songs is giving the GOP exactly the sort of ammunition they seek to demand change this Fall. #Bam4Ham

The anger has also led to lots of inside jokes on #Bam4Ham, in true Hamilton fan fashion. There’s no word on if any more of the performance will appear online, at least on official channels, but fans can catch the opening number and “My Shot,” along with Obama’s remarks, on YouTube now.

Update 6:19am CT, March 15: The livestream may have cut out, but Miranda and Obama did give us a sweet freestyle video in the Rose Garden.