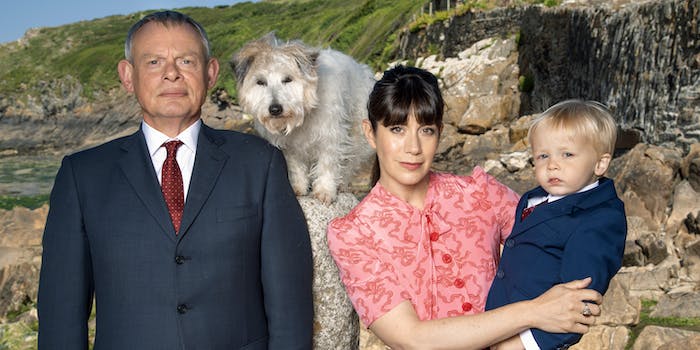 How to watch ‘Doc Martin’

After developing a fear of blood, the brilliant and successful surgeon Dr. Martin Ellingham is forced to move from London to the Cornish Hinterlands and start a new career as a general practitioner. The villagers of Portwenn, who insist on addressing Ellingham as “Doc Martin,” offer little respite to the ailing physician as he juggles his quick-witted receptionist and incredibly kind-by comparison patients. It doesn’t help that Ellingham’s bedside manner is less than exemplary.

Despite his abrupt delivery and grouchy persona, even the villagers have to admit that Doc Martin is an incredibly capable physician. I mean, the man is so by the book he doesn’t even take off his suit jacket when delivering babies. Still, Doc Martin is making the most of it in his new Cornish fishing village home, and after nine series’ he’s even managed to hire a phlebotomist and fall in love with a friendly school teacher. You know, that whole “opposites attract” thing.

Here’s everything you need to know to watch Doc Martin online.

What channel is Doc Martin on?

Doc Martin airs on British channel ITV, and is distributed in the U.S. on Acorn TV.

How to watch Doc Martin

Nobody does mystery, drama, comedy, or documentaries quite like the folks in the British Commonwealth. Trouble is, getting shows like Line of Duty, Murdoch Mysteries, Miss Fisher’s Murder Mysteries, and My Life Is Murder stateside is about as rather difficult.

Luckily, streaming service AcornTV compiles these hard-to-find gems from Britain, Ireland, Australia and beyond in one convenient destination. Plus, like any great streaming service, there are fantastic original series including Agatha Raisin, Loch Ness, Manhunt and Mystery Road. New shows are added weekly, so there’s always something new to catch once tea time rolls around.

You can try the service for a week before committing to subscribing. After that, it’s only $5.99 a month or $59.99 if you pay for a year all at once. Best of all, you can even gift a subscription to the Anglophile in your life.

Seasons 1-5 of Doc Martin are available on Hulu. If you subscribe to Hulu with Live TV you’ll get the on-demand portion of Hulu included for free. You can also upgrade to Hulu No Commercials for $11.99 per month.