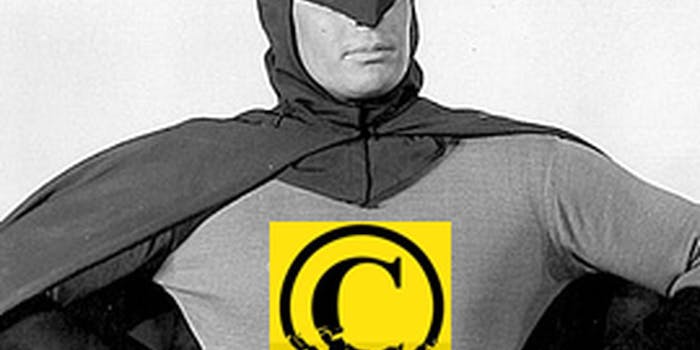 Warner Bros. has filed a copyright claim over a Twitter hashtag used to promote The Dark Knight Rises.

Batman fans might want to avoid spoilers on Twitter, but if Warner Bros. has its way, that’s not all they’ll want to steer clear from: The Hollywood media megalith has issued a copyright claim over a hashtag: #legendends.

Blogger Will McManus noticed the claim was posted to the Facebook page, The Dark Knight Rises – UK. The terms of use state that any time you use the hashtag in a tweet, you’re ceding “a perpetual, irrevocable, royalty-free, fully transferable and sub-licensable, worldwide licence to use (including, without limitation, the right to modify, display, copy, publish and create derivative works of) your tweet for commercial and promotional purposes.”

The terms of the license would probably apply only to the U.K., which doesn’t have the same law doctrine of Fair Use that the U.S. has. WB must be aware that it can’t actually extend those terms to Twitter users all across the globe. A quick search of the U.S.’ Patent and Trademark search site reveals that Warner Brothers hasn’t filed to register “legend ends” in the states or in the European Community trademark office.

However, if, over the next few days and weeks, people begin using the hashtag solely in conjunction with Batman and The Dark Knight Rises, which many have already done, WB will have a strong case that it has established trademark rights to the phrase.

Copyright lawyer Heidi Tandy, who is on the legal staff of the Organization for Transformative Works, believes that while the license is a “limited license similar to the kind you’d find on a bulletin board.”

“It’s a problematic move,” Tandy said, “and shows overprotectiveness by WB UK, but the license they’re asking for is virtually identical to the one every Twitter user grants to Twitter itself – and Twitter already has the right to license those rights away.”

Twitter’s Terms of Use state: “By submitting, posting or displaying Content on or through the Services, you grant us a worldwide, non-exclusive, royalty-free license (with the right to sublicense) to use, copy, reproduce, process, adapt, modify, publish, transmit, display and distribute such Content in any and all media or distribution methods (now known or later developed).”

Essentially, Warner Bros. is asking tweeters for a license that’s virtually identical to the one that every Twitter user already agreed to when signing up for the service.

Still, not all Batman fans are going to be happy about coming under the purview of a corporate thumb just for tweeting their excitement about the film.

“You’ve given them everything..” Jordan Craw joked on the Terms of Use page. “Not everything, not yet.. but I will have when I’ve accepted the terms of use.”