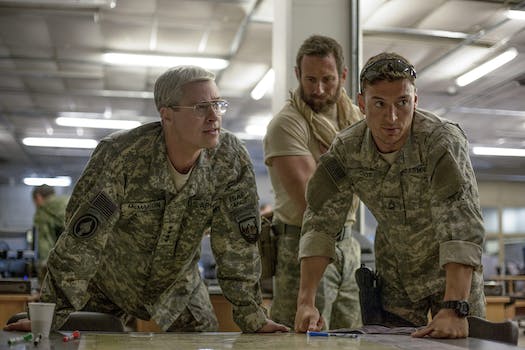 The Netflix war film is an unfocused mess that wants to be all things to all viewers.

McMahon, the latest general assigned to oversee the failing Afghanistan conflict, believes he can be the one to end the war. This will not be the case, and everyone seems to know that but him. The general thinks that a campaign of morale, shaking hands with the Afghan people, and smiling for a photo op, is just what the country needs. Deeming himself the smartest man in the room, McMahon ignores the advice of intelligence advisers. During an early briefing, a British adviser explains that Helmand, the region home to al-Qaeda, is unwinnable. It’s also unnecessary, boasting a small percentage of Afghanistan’s population.

What does McMahon do? Make it the central target of his baby-kissing mission.

Brad Pitt, the star and producer of Netflix’s War Machine, has played this kind of soldier before. He’s very good at it. McMahon is a less maniacal version of his twin Nazi killers in Inglourious Basterds and Fury; the general carries a stick equally as big, but at least he speaks softly. Pitt gives McMahon Dr. Strangelove crazy eyes, suggesting that only a madman could find himself in a situation this, well, mad. It’s just cartoonish enough without going too far over the top.

The general would be a great character in a film that deserved him.

The streaming platform’s latest original movie is an unfocused mess that wants to be all things to all viewers—an absurdist comic farce, a withering drama about the ego of war, and a fairly straight-up action movie. Writer/director David Michod, whose Animal Kingdom is among my favorites of the past decade, never properly reigns in his material—letting his script wander wherever it may. Every time that War Machine shows signs of life, it goes back into a coma. Viewers may find themselves doing the same.

Here is the part where one would normally summarize the plot of War Machine, but that is a strangely difficult task. The movie appears to go several directions at once, while committing to none of its threads. The A-plot is the most involving. Things immediately start to go awry for McMahon in Afghanistan. The country’s new leader, Karzai (Ben Kingsley), doesn’t want to work with him. During a bedside visit to plead for mutual cooperation, the Afghan president informs McMahon that if his own commander-in-chief won’t be available to him, Karzai won’t either. Obama doesn’t want to be in Afghanistan and has extremely little contact with the general. The POTUS, McMahon claims, has only spoken to him once.

But McMahon won’t admit that he’s been stranded in the desert by an administration out of ideas. He can’t. McMahon has been training for Afghanistan his entire career, and this mission represents the culmination of his life’s work. He doesn’t know how to do anything else. During an anniversary dinner with his supportive wife (Meg Tilly), McMahon imagines what life would be like if the conflict ended. He would be grilling in the backyard, wearing a polo T-shirt and dad jeans. It’s clear that the general believes this to be a horror worse than war.

War Machine has so many ideas and clashing tones that even its strongest scenes don’t land. The film has so many supporting characters that they are reduced to cameos. The military base’s tech advisor (RJ Cyler) shows up for a couple scenes to help McMahon fix odds and ends around the base, including his electric razor. A spin doctor (Topher Grace) accepts a great deal of money to help sell the war effort, but he doesn’t appear to do much selling. A shell-shocked marine (Lakeith Stanfield) has a great moment where he voices his confusion about what exactly is going on here: How can the troops make “friends” with the Afghans if they’re constantly worried about getting blown up by them?

That’s a harrowing admission, and it’s one that would have been a strong subject for a film had it been teased out more. But Michod’s script leaves it on the shore to flop around, like a dying fish begging for water. The soldier returns for a brief scene in which he commits horrific atrocities and then is gone.

War Machine doesn’t want for things to say, and some of its insights are sure to stick with you. But in addition to being grossly overstuffed, the film has a bad habit of explaining its themes to us, as if we were being handed the CliffsNotes. It’s pandering and more than a bit insulting.

For instance, a Rolling Stone journalist, Sean Cullen (Scoot McNairy), assigned to cover McMahon does double duty as the film’s narrator. His incessant monologues are as heavy-handed as they are unnecessary. “He was like a throwback to another era,” the reporter says. “His hand was bent into a permanent claw like it was still clutching a World War II cigar his modern fitness fanatic self wouldn’t allow him to smoke.”

It is a good thing I am not this man’s editor, because if that copy were turned into me, he would have been fired. Cullen also appears to be the only war reporter in recent memory who doesn’t carry a tape recorder, carrying instead his trusty pad and paper. Even Nancy Drew would have bothered to bring a laptop.

I’m not sure if War Machine is a satire, and I’m not sure if the movie is sure that it’s a satire. Sometimes it has the comic lightness of Joseph Heller’s Catch-22, while other times the movie wants to be The Hurt Locker 2: Napalm Boogaloo, striving to make us feel something. But a great sendup of the Middle East quagmire would have required a laser-focused intensity, including a script that dared to be as bonkers as the war itself. Michod needed a touch of that Kubrickian insanity; it needed Major T.J. Kong riding an atomic bomb like a rodeo cowboy. Pitt certainly goes all the way in committing to his larger-than-life character, but his director should have gone with him.