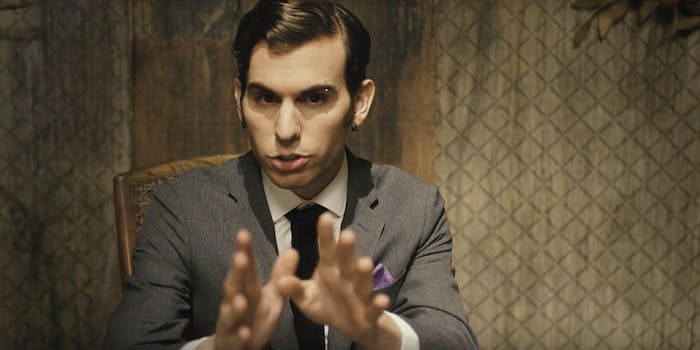 Vsauce is one of the pioneering forces behind revolutionizing education on YouTube.

“Jack Black is ruining my life!” Jake Roper explains as I make my way through the maze of moving boxes filling Vsauce New York office.

In a week, Roper will be moving 2,000 miles across the country to Los Angeles, where he’ll be setting up shop in the YouTube Space LA. After living in New York City for 10 years, Roper is currently in the eye of the storm, packing up everything he owns—Internet cat shirt collection included—while also waiting to hear back if Jack Black is indeed free to film a Vsauce video on Monday. Roper attempts to patiently wait for the scheduling confirmation to make its way into his inbox but instead, he finds himself obsessively playing horror movie tracks and an iconic fight scene from Oldboy over and over again for inspiration.

“I love watching something and then feeling bad about everything I’ve ever made because it then pushes me to do better, and I need that,” Roper enthusiastically shares, citing the book American Psycho and videos from Corridor Digital as examples. “At least, that’s how I motivate myself to make things… By being impressed by somebody else and that pushes me, not to outdo them, but to keep passing the torch. They’ve impressed me, I want to impress them even if they don’t know of my existence.”

Upon meeting Roper in person, it becomes blatantly clear that his “on-camera persona” is in fact just his personality. His quick-paced speaking cadence and animated hand gestures bring his stories to life in the air between the two of us as we talk about everything from online video to Taco Bell’s best menu items.

“This thing happens if there is a project looming in the near future: I just can’t focus on anything else, so I just sit here and listen to music that I want to put in the video. I just sit here and stare at my screen not doing anything and visualize in my head how it’s actually going to play out onscreen,” Roper explains as he shifts back and forth in his chair, unable to contain his excitement for creating video with Black.

Combined, the Vsauce brand is one of the most well-known alternative education networks on YouTube.

After graduating from New York’s School of Visual Arts, Roper spent time working in television and advertising before starting on his career in digital media. While it’s hard for to see him as anything other than the fast-talking, taco-obsessed investigator behind Vsauce3, Roper originally started at YouTube hosting a show called Space Lab.

“I kind of realized on YouTube you have a lot more control over everything that you do,” says Roper. “Instead of just directing something and somebody else editing it, or a creative director and a copywriter telling me what to do, I could control every aspect of it.”

In 2012, Roper joined the Vsauce team of Michael Stevens (the original Vsauce founder) and Kevin Lieber (Vsauce2) and began hosting the Vsauce3 channel, an education channel dedicated to investigating the science behind fictional worlds. Combined, the Vsauce brand is one of the most well-known alternative education networks on YouTube, with over 15.3 million subscribers.

“I never thought I was really smart enough to be… so here’s the thing,” Roper leans forward to tell me. “We [Vsauce] don’t really like saying we’re educators ever. We’re just investigators. We find information, we put it together in a nice little case file, and we present it to you, the audience.”

Along with the Vlogbrothers’ Crash Course and channels such as Brain Scoop, It’s Okay to Be Smart, Laci Green’s Sex+, AsapSCIENCE, Brain Craft, and Veritasium, Vsauce has been one of the pioneering forces behind revolutionizing education on YouTube. But as Roper points out, Vsauce hosts make a conscious effort never to share their personal opinions in videos, but to use their research to answer—if possible—the question they’ve presented to their audience. Can the Kool-Aid man break through walls? Who owns the moon? Can you hear with your tongue? Vsauce’s trio of personalities have set out to change how we approach learning by taking complicated concepts and breaking them down with real-life, pop-culture-oriented examples.

“Learning is cool again, which I like! It’s cool to be smart, where I think when I was growing up, it wasn’t really,” shares Roper. “I think the Internet has allowed people to have that information and for it to be attainable to them personally where also they don’t have to publicly admit they like that stuff.”

The key to Roper’s online success is twofold. For one, Roper oozes creative passion, and it’s highly contagious. And not only is he passionate about making videos and music and writing, but he pushes past obstacles to execute his ideas without making excuses.

“You’re watching a YouTube video, and you’re like, ‘I had the same idea!’ Yeah, but you didn’t do it. That’s the difference. If you have an idea and you’re really passionate about it, do it because someone else is going to do it instead, and they’re going to get the benefit of it and not you. ‘I should start a YouTube channel’—then start it! Just do it. Once you do it, then you’re already on the way to continue doing it, and that’s the hardest barrier to try and get over.”

I have no doubt that Roper’s given this go-get-’em speech before, and his eight-hour octopus tattoo—Seth the cephalopod, as Roper calls him—comes to life each time he exclaims “Just do it!” One of many tattoos (including some Vsauce ink on his forefinger), this particular tattoo took two Lord of the Rings movies to complete. Ironically, Roper and his co-worker Watson joke that Roper spent the entire time biting down on a wooden spoon, yelling “Just do it” with the same passion taken from his speech.

The second major factor in his success is his genuine authenticity. Jake Roper is exactly himself, no apologies. He loves few things more than Taco Bell, where his 16-year-old self gorged himself on Mexican Pizzas. He rarely has free time, but when he does, video games are usually involved in some way. He just bought a Tesla, his first car, for his new home in Los Angeles. He believes that he’d be the first person eaten by a sea monster, and his eyebrow piercing is as much of his signature look as his skinny jeans and pepperoni pizza shirt. Roper has turned his audience from a number into a family, a personal relationship represented by the fan mail, original T-shirts, and taco-inspired merch found floating around the Internet.

“YouTube becomes your world and that’s part of the reason I think people gravitate towards your content,” he reasons. “You know everything about the person, to a degree. My Twitter is public-facing, my Instagram, Facebook—everything is. So my life really is just curating this brand which becomes yourself. There isn’t really too much I do outside of YouTube that doesn’t either wind up on YouTube or some social platform.”

Over the past three years, Roper has gained nearly 230 million views investigating our favorite fictional worlds with that winning, personal recipe. A video can take Roper anywhere from a month to a year between heavy research, writing, filming, editing, and uploading, but he’s helped his audience of 2.5 million subscribers contextualize Superman’s strength, hypothesize about the weight of Thor’s hammer, and understand the true deadliness of Pokémon. Still, he’s not sure if that qualifies as “success,” per se.

Vsauce’s trio of personalities have set out to change how we approach learning.

“I don’t know what success is. I don’t think I’m successful, and I think it varies depending on the person,” Roper shares to my disbelieving scoff. “For me, I don’t think anything I’ve made or done has been a success because I always think that if you say, ‘Oh great! I’m successful now!’ then you’re not going to try as hard. You’re like ‘I’m good, I’m successful.’ I just want to keep making things and after I make it, be like, ‘Cool, how can I make the next one even better?’”

Roper will no doubt continue to excite YouTube audiences around science and creativity, pushing his viewers to simultaneously set goals and limits for their creative careers. In the future, he hopes to grow Vsauce into a tangible brand with ties to music production, games, and much more. But until then, you’ll find Roper sitting inside his office, guarded by past props such as the robot villain from Doctor Who and Jigsaw the puppet from Saw, mulling through music and wondering if in 48 hours, he and Seth the cephalopod will be 2,000 miles away, yelling “ACTION!” at Jack Black.