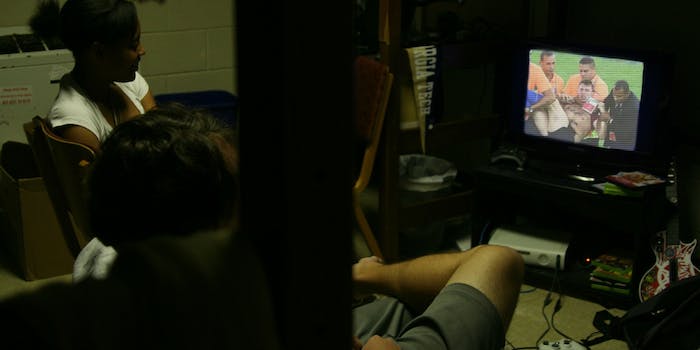 The fan had “natural born prankster” scrawled on his torso, and that statement is somewhat true.

During Sunday’s World Cup final, one of the biggest plays wasn’t shown on camera. And it wasn’t actually part of the game.

During the second half, a fan ran onto the field. The camera cut away to a shot of the Christ the Redeemer statue. However, newly minted journalist LeBron James happened to catch the action in an Instagram video.

The fan had “natural born prankster” scrawled on his torso, and that statement is somewhat true. The Cup disrupter was none other than YouTube prank star Vitaly Zdorovetskiy, who is perhaps best known for his ill-advised bomb and zombie attack pranks.

Zdorovetskiy hinted at the stunt last night on Twitter.

See you guys tomorrow on Tv 😉 Germany vs Argentina

He also attempted to get a smooch from Germany’s Benedikt Howedes before being tackled and hauled off the field, but Howedes gave him the gas face.

How will he ever top this prank?