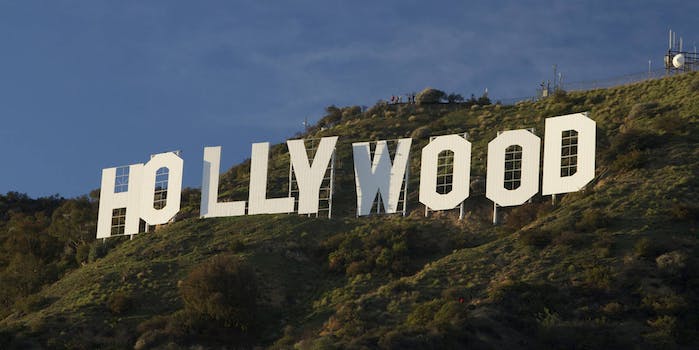 It's not the first time he's been arrested.

On Wednesday night, Los Angeles police had to talk a YouTuber down from the Hollywood sign.

Prank star Vitaly Zdorovetskiy was arrested after he climbed the sign (twice) and waved a flag that said “I’m back.” On Tuesday, Zdorovetskiy tweeted out that he’d be filming a “huge stunt” on Wednesday. It definitely caught the attention of KTLA’s sky team, who captured him atop the D in the sign.

Man on the 'D' of the Hollywood sign… Watch @KTLA for updates on this situation!! @Sky5Tim pic.twitter.com/em4FO4q09U

BREAKING: A YouTube prankster has climbed the Hollywood sign and is waving a flag from above the D. @Sky5Tim pic.twitter.com/InGcdpnb4f

There were also drones in the area filming the stunt, which did not make helicopter pilots happy.

His movie, Natural Born Pranksters, was released earlier this year on demand, so it’s not a stunt for that, but it is likely a stunt for another prank-related movie or endeavor. In 2014, Zdorovetskiy ran onto the field during the World Cup final; he was arrested and fined. He was arrested in 2012 for a fake bomb threat related to one of his videos.

Zdorovetskiy will likely be fined and could possibly spend up to six months in county jail. He was released on bail Wednesday night and told ABC 7 he did it “because adrenaline, man. You only live once and you have to explore things. I got high on life.”