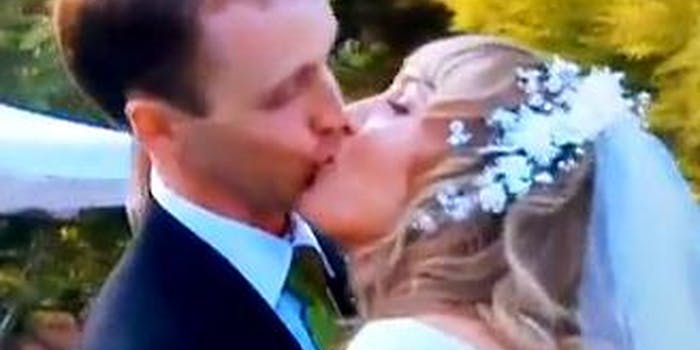 Here are a few YouTube videos that will help ensure that your first kiss is smoother than the one recently featured on TLC's Virgin Diaries (though that's not saying much).

Some virgins don’t even know how to kiss.

The promo for TLC’s new reality show Virgin Diaries is currently making the rounds on the Internet for what may be the most awkward kiss caught on camera. The young married couple, just pronounced husband and wife, appear to eat each others faces in a rather unsettling —and haunting—manner.

A little over a week ago, the Daily Dot reported on redditer Sacamato’s landing a spot on the show based off a post he made describing his ineptitude with women. It’s not surprising that Reddit has multiple threads on the promo, which undoubtedly helped spur the video’s success. Last night the promo had less than 80,000 views. At press time, it had half a million.

No one wants to be mocked, or embarrassed, least of all on national television, especially during a supposedly intimate moment. To prevent such a scene from happening again, the Daily Dot has compiled the best kissing tutorials for your viewing pleasure.

YouTuber Vanillebriseuijhvc’s 55-second kissing tutorial, viewed almost 5 million times, explains the importance of tilting your head to the side and suggests making contact with the lower lip first.

If you’re in need of some close-up shots on what to do with your lips, tongue, and hands, complete with romantic piano music, check out dhanis’ 2:44-minute video. (You will have to verify your age.)

VideoJug narrates various ways to set-up a kiss, including how to make your partner feel more comfortable, in a sexy french accent. William Cane, the author of The Art of Kissing, runs through 30 different ways to kiss in his multi-part YouTube series.

The Wing Girls, a duo dispensing practical dating advice to men, has an excellent video on the do’s and don’ts of kissing, and is worth viewing for the novice lip-locker.

Looking for something a bit more humorous? Check out lukecooldude’s take on kissing tutorials, complete with a UK accent.

Or, if you’d prefer something from a man what could be Jim Carrey’s son, watch GradualReports’ tutorial. Most of his video is comedic nonsense, but he does offer good advice when he suggests practicing on a peach.