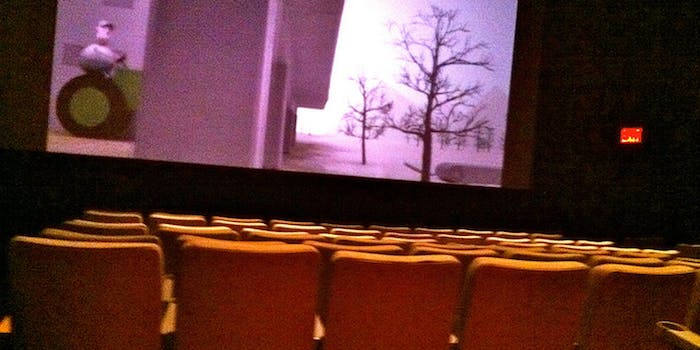 Vine and Twitter are coming to a movie theater near you

The six-second video app Vine has become an experimental platform for comedy, and making “Vine stars” out of certain users. Where does it go from here? This summer, you’ll be seeing more than just previews in movie theaters. Vine will be wrapped around the big screen.

Twitter, which owns Vine, and National CineMedia have paired up to bring Vine videos and entertainment tweets to roughly 20,000 theaters affiliated with NCM, an in-theater advertising company. This partnership will include a 60-second weekly entertainment show, which will apparently invite theater-goers to interact with the discussion via Twitter. In a statement about the partnership, Cliff Marks, NCM’s president of sales and marketing, acknowledged Twitter’s role in distributing film news and trends:

“Twitter has become an amazing barometer of movie trends, and this new show will take theater audiences beyond the red-carpet for an original look inside the world of movies.”

A viewer’s tweets could even end up on a big-screen stream, which points to Twitter’s influence and presence beyond smartphones and tablets. Last fall, Regal Cinemas, one of NCM’s advertising partners, released clips from popular Vine star Jason Nash, which could point to collaborations and previews to come. It also boosted Regal Cinema’s social media presence on YouTube and Twitter.

Twitter and NCM are currently looking for sponsors for the venture, and brands to shape the project. Whereas movie screens once advised viewers to turn off their phones, a new era of disruption and engagement is suggesting otherwise.

Photo via Sarah_Ackerman/Flickr (CC By 2.0)