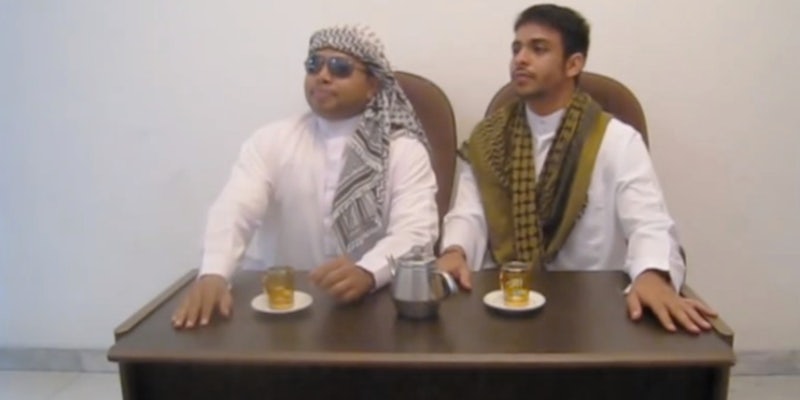 You need to follow the two funniest Vine stars in Indonesia

In Indonesia, a new generation uses Vine to express themselves.

Duo Harbatah, an Indonesian comedy duo comprised of Usama Yusuf and Harun Syarief, has only been on Vine since March, but they’ve quickly become one of the most popular Indonesian channels on the app. In their very first vine, they satirize the universal narcissism of social media: A young man takes selfies, oblivious to a masked robber behind him, who then succumbs to the pull of the digital reflection pool.

Yusuf says Vine isn’t that popular in Indonesia; Twitter and Instagram are the preferred social media platforms. In fact, Twitter was one of the main tools used to get the word out to a younger generation about Joshua Oppenheimer’s recent documentary on Indonesia’s 1965 genocide, The Act of Killing.

He adds that most Indonesians on Vine aren’t using the platform for comedy, but that’s slowly changing. The hashtags #indonesianviners, #indonesianvinecommunity, and #vindo show a fairly vibrant community of Indonesian teens and twentysomethings spoofing the “Selfie” song, remaking American Vine star clips, and addressing issues of racism and sexism.

Duo Harbatah’s vines also touch on pop culture, spoofing Frozen and the “Nae Nae,” as well as exploring family relationships and our obsession with our phones. Their YouTube channel takes that idea even further, parodying American Idol, Flappy Bird, and Paranormal Activity.

In a few clips, they satirize the Middle Eastern terrorist stereotype.

“Well, actually, I am Indonesian,” says Yusuf, “but our ancestors are coming from Middle East, so that’s why our Arabic culture still running in our blood. That’s why sometimes we make a joke about our culture, just to make people aware that Arab people also have a funny side.

“And not all our Vine is about Arab stereotype,” he adds. “We also make Vine about young people, about art, about family, but still in a comedy way.”

Duo Harbatah started to make YouTube videos in 2013, but in March they switched to Vine. Yusuf says it’s both easy and challenging, because “you have to be creative in only six seconds.” As for the #vindo community, Yusuf highlights its importance:

“[It’s] a community of young viners [in] Indonesia who share their thoughts and ideas to improve Indonesian [Vine] and to introduce Vine to Indonesian people. They’re kind of like the first Indonesian Vine community in Indonesia.”