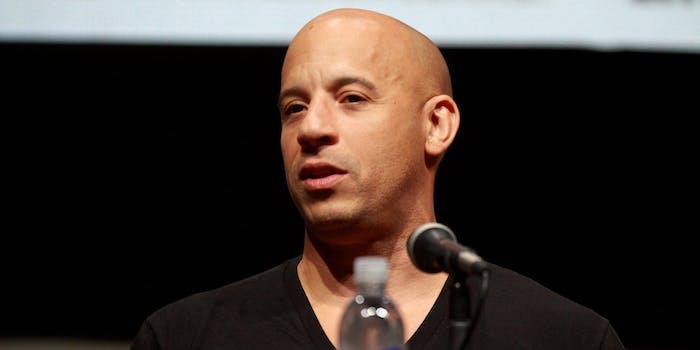 Vin Diesel shows off his vocal stylings of ‘Stay With Me’

It's like if a giant thumb could sing gorgeous ballads.

Action star and sentient human thumb Vin Diesel is a man of many talents. Though his oeuvre might not suggest it, he’s an actor capable of emotional range that plumbs the depths of the human experience.

The Fast and Furious franchise staple first flexed his vocal muscles with a cover of Rihanna’s “Stay.” In the YouTube video turned arthouse film, Vin covers “Stay” in front of a projection of the music video while wishing everyone a happy Valentine’s Day in his deep baritone.

Enamored with his rich timbre, the public has begged for more, and that’s just what a British radio station has delivered. During a press junket for Guardians of the Galaxy, Diesel sat down with Capital FM and delivered a rendition of Sam Smith’s heartfelt ballad “Stay With Me,” after some light coaxing. What ensues is a cover imbued with such a booming bass that it will vibrate the tears right out of your eyes.

The dulcet tones were so touching they even made their way to the ears of Sam Smith himself.

Given Smith’s reaction to the cover, can we expect a perfectly paired tenor and baritone duet anytime soon? Let’s hope so.