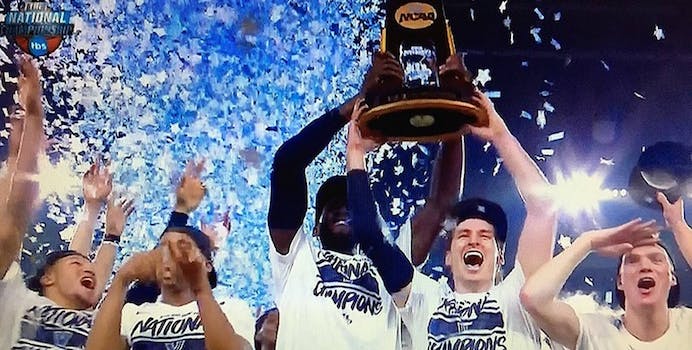 Now it's time for the Crying Jordan meme to go away.

This video comes courtesy of Kris Jenkins and led Villanova—who once upon a three decades ago, sprung one of the biggest upsets in NCAA tournament finals history—to a 77-74 victory vs. North Carolina on Monday night.

That’s pandemonium (for Villanova fans), nausea (for UNC fans), and pure joy (for everybody else who had the pleasure of watching the contest) in one neat, little vined package.

And it came only seconds after this amazingly clutch shot by UNC’s Marcus Paige to tie the game with 4.7 seconds left.

Thus, in the span of five seconds of game time, UNC fans went from hopeful to jubilant to despondent.

With Michael Jordan, who became a star while leading the 1982 Tar Heels to the NCAA title, in attendance for Mondays’ game in Houston, the Crying Jordan meme—which he has said in the past that he doesn’t find hurtful —was out of control.

Lmao these crying Jordan memes are even better than I thought pic.twitter.com/TGKn0hBFMn

For the record, Jordan wasn’t crying at the end of the game.

And thus let us now say this: Your job is done, Crying Jordan meme. You may now burn in hell along with Kermit the Frog sipping his tea and the crying Villanova piccolo player meme from last year’s NCAA tournament.

Besides, this article shouldn’t be celebrating the sadness of a celebrity. It should be to honor the Wildcats, who won their first NCAA title since beating Georgetown in 1985, and received one of the most satisfying title victories ever. Thanks largely to a player in Jenkins who barely played in the first half because of foul trouble and picked up his fourth infraction with 6:50 to play.

Yet, after Paige hit his double-pump 3-pointer to tie the game, it was up to Jenkins to end it before overtime.

Said Jenkins: “I think every shot is going in. That one was no different.”

But North Carolina figured to have the advantage near the basket before Monday’s game began. With a team that had pounded Syracuse for 50 points in the paint in the semifinals, that was one reason it was easy to understand why UNC was the favorite heading into the title contest. Why they were seen as the Hillary Clinton of the Final Four.

Mostly because UNC got great play from its guards.

Yet in the second half, the Wildcats exploited the Tar Heels’ ineffectiveness in the paint, and it led them to their first national title since another underdog Villanova team, the lowest-ever seed to win the championship, upset one of the college basketball’s elite programs more than 30 years ago.

Perhaps Monday night’s game was even more impressive. Or at the very least more exciting.

For that, we feel confident in saying this.

Crying Villanova piccolo player, you are now excused from the Internet.

And while it’s time to let Crying Jordan be relegated to irrelevance, we probably won’t because we probably can’t.