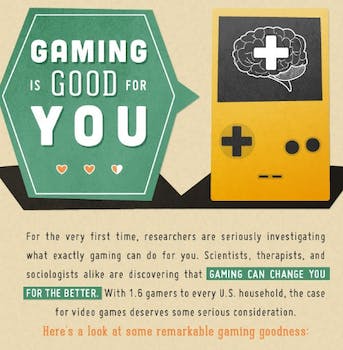 Video games are good for you, dad says

Fact: Video gaming is good for you.

Frugal Dad, a blog that ordinarily covers money-saving measures, gathered all the data proving how helpful video games are and illustrated them in a pretty infographic published March 29.

Did you know 76 percent of married couples who played role-playing video games (RPG’s) said it had a positive effect on their marriage? Forget marriage counseling!

Or, how about the handy fact that surgeons who play video games are 27 percent faster, and make 37 percent fewer mistakes, than their non-video game playing counterparts?