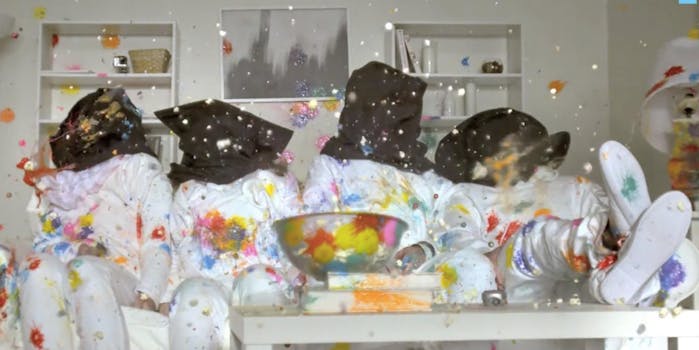 Paintball onslaught paints the picture of the effect of offensive words.

What would it be like to be pelted with as many paintballs as there are swear words in 2013’s The Wolf of Wall Street? A new video from content filtration platform VidAngel does just that, documenting a 3,192-paintball attack in an attempt to visualize the effect of those swear words on a family of four. Ouch.

The concept behind VidAngel is simple: Families should have control over the content they watch in their homes. Co-founder Jeffrey Harmon was spending a lot of time watching YouTube videos, and he quickly realized that much of the content was in some way vulgar and perhaps not what he’d want to show children in his family. The idea for a tagging system was born, one that could be crowdsourced and then applied to all the video content on the system through a browser plugin. Unfortunately, YouTube is growing at such a rate that tackling that platform first would be impossible, but the technology can be put to use on more manageable content first: movies.

The service now tags content from films and allows families to set their own preferences for what is or is not filtered out of the content. Harmon stressed that the service is not a moral authority, and that families themselves pick the filters and determine what constitutes a naughty scene or a “bad word” in their house.

“You don’t like the f-word, you turn it off and it’s not there,” he explained, citing that the company had seen a phenomenal response from families and conducted a consumer study that showed 50 percent of parents surveyed were looking for a service like theirs. “It’s not the creator’s job to censor, it’s the individual’s.”

The company turned to YouTube to promote the service, producing the paintball video and a behind-the-scenes look at how they created the moment. With the release of the promotional video, which racked up 150,000 views in a day and a half, VidAngel has fielded some complaints that they’re pro-censorship, which Harmon disputes.

“You shouldn’t ever censor art,” he told the Daily Dot. “But our view on it is there’s a big difference between government censorship and creator censorship, and individuals choosing what to censor in their own home. We’re for people being able to censor things in their own homes if they want.”

Others have complained that they’re hypocritical for using violence in a video to promote a service that removes violence for families, to which Harmon suggests, “If you have a problem with this, then you really need VidAngel!”

Beyond films, the company’s goal is to make all YouTube content filterable, which Harmon projects is a 2015 endeavor. The service does work on popular viral video content already, but Harmon knows that increasing VidAngel’s footprint is important.

“My nephew, who’s 11 years ago, I was over visiting my brother’s house and he’s explaining string theory,” said Harmon. “I asked him, ‘Where did you learn this?’ YouTube. YouTube is the learning platform of the 21st century, so we don’t want parents who feel like it has more content than they want to have to worry about that. We don’t want them to say, ‘You have to turn [YouTube] off completely.’ That’s the vision behind VidAngel. To give parents more control over their own media inside their own home.”