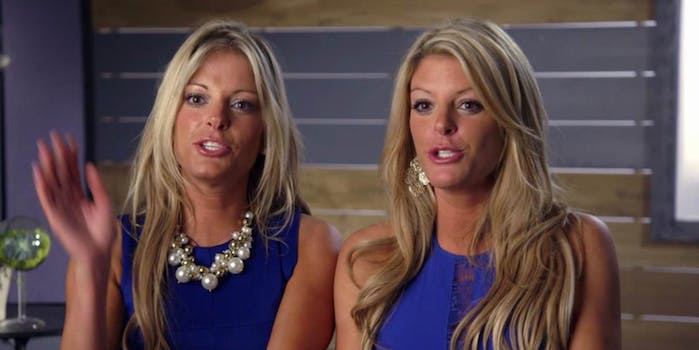 Why 'Twinning' is the escapist monstrosity hit of the summer.

I discovered Twinning on a warm weeknight—curled up with my laptop in my bed, comfortably stoned. This is how I’d recommend you stream the ultimate hate-watch in television.

For those of you who don’t know—and this is not a show that’s been generating a huge amount of buzz—Twinning is a new reality competition series that premiered last week on VH1. During the mean-spirited shenanigans, 12 sets of twins compete for a large sum of money.

The twist is that they separate each set of siblings—not only are the contestants on a reality show that is about to exploit them into infamy, but now they don’t even have the comfort of being with their family. Each challenge tests their synergy (or rather, “twinergy”).

On the show, they actually refer to this as “twin-tuition.” The twin puns never end.

The reward for winning a challenge: The twins are allowed to be reunited for 24 hours, and they get to choose who’s up for elimination.

The contestants are a typical cast of misguided, desperate people you often find on VH1 reality shows:

The show is hosted by Angie Greenup, who you’ve also never heard of, but according to Wikipedia, she is a 34-year-old comedian. She is a fine host, but perhaps the most disappointing thing about Twinning is that it’s not hosted by identical twins.

All in all, Twinning is the perfect show for those who love trash. It’s the pinnacle of cruel intention-laden, melodramatic reality TV. I can’t wait to see how the rest of the season unfolds—for a network that’s poisoned countless D-list celebs and given platforms to dating gurus who are actually monsters, Twinning is an exciting new apex.