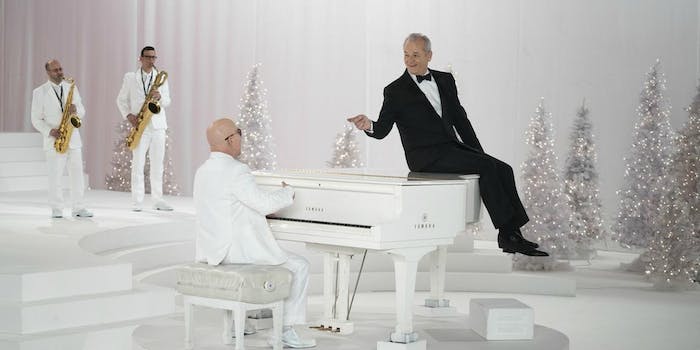 Was it all a dream?

The holiday TV special is nearly extinct, but if there’s anyone who could give it a little life, it’s Bill Murray.

Via Netflix, A Very Murray Christmas both throws back to the golden age of variety shows and allows Murray to poke a little fun at himself. His persona here isn’t far removed from his sad-faced Lost in Translation character, and that’s no coincidence: Sofia Coppola directed the special. She told Vulture:

Christmas is a time when you can be old-fashioned. We liked the idea of making our version of a corny holiday special that doesn’t seem to be around anymore, where you can kind of throw anyone together and it doesn’t have to have any logic — when David Bowie sang with Bing Crosby, that sort of thing, except with Bill Murray and Chris Rock and putting them in matching sweaters.

There is sadness, panic, and doubt: the essential elements of the holidays.

Murray is supposed to host a holiday special at the Carlyle, but a blizzard has strangled New York City. (Somehow, Michael Cera got in, though.) Murray’s producers (played by Amy Poehler and Julie White) and musical accompaniment, Paul Shaffer, try to console him in the absence of scheduled talent. But then he runs into Chris Rock, and the string of celeb encounters within the halls and bars of the Carlyle is set into motion: Maya Rudolph, Rashida Jones, George Clooney, Jason Schwartzman, Jenny Lewis, Miley Cyrus. Every scene is connected by a performance of a holiday song, but beyond that, there’s not much holding it together.

And that’s fine. It feels like Netflix threw a budget at them and said, “Get some big names. Get some of your friends. Do whatever.” A Very Murray Christmas isn’t necessarily trying to imitate the specials of yore; instead, there’s more of a fantastical foundation, as Murray tries to help the stranded people around him: in love, in booze, in song. There is sadness, panic, and doubt: the essential elements of the holidays.

Is this something you’ll want to watch with your family? Possibly, but at under an hour, it functions more as background viewing. Perhaps we’ll see Murray or Coppola on Netflix again soon.