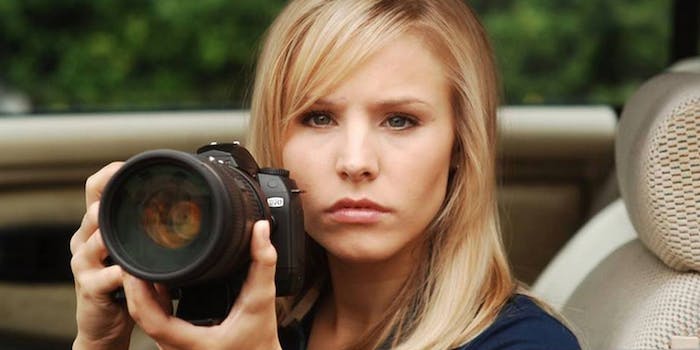 The fan-backed Veronica Mars movie is out in theaters this weekend.

Okay, marshmallows. Here’s the deal. The Veronica Mars movie is everything we hoped it would be. There are nods to our favorite moments from the show. There’s that turbulent Logan love story. And of course, there’s that oh-so-snappy Rob Thomas dialogue that made the show a fan favorite.

Veronica Mars is a solid, snappy mystery that could earn the former teenage detective as many new fans as she already has old ones. Why? For pretty much the same reason the show was a success in the first place: Veronica Mars is now and forever will be one of the great female characters in our popular culture.

The film picks up nine years after the series ended, with Veronica Mars, a Stanford grad with a law degree, applying for her first big girl job as a New York lawyer. She’s with her college sweetheart Piz (Chris Lowell) and she’s given up all that sleuthing because, well, it was rather unhealthy for her.

But just as things are looking up, Veronica’s ex-boyfriend Logan Echolls (Jason Dohring) is once again accused of murder. This time it’s his pop star girlfriend. It doesn’t take long for Ms. Mars to hear those words once again, “Veronica, I need your help.”

Echolls, who still lives in Neptune, Calif., enlists Veronica to vet the legions of wanna-be celebrity attorneys who are trying to represent him. Veronica, however, realizes quickly that she’s not going to be able to stay away from the mystery around who really killed Echolls’ girlfriend. Soon she’s back to her old ways.

Of course, this doesn’t sit well with her private detective father (Enrico Colantoni), who just wants Veronica to live the successful life he always wanted for her. And her boyfriend doesn’t like the idea of her hanging out with her ex. But when there’s a case to be solved, even the people closest to Veronica won’t be able to stop her from doing the exact thing she knows she should do: Going back to the world of private investigation.

There’s a subplot in the movie as well, one regarding an increasing amount of corruption among the Neptune elite. If there’s one flaw in Veronica Mars as a stand alone film, it’s the incompleteness of this story. But coming from the perspective of a multimedia experience, it may be one of the film’s biggest assets.

Veronica Mars really isn’t intended to be a film in and of itself. Director and creator Rob Thomas acknowledges this when he admits he’s writing a Veronica Mars book. As a transmedia experience, one initiated by the fans but orchestrated by a dedicated group of artists, Veronica Mars may very well be a masterpiece.

Still, the film achieves something very few TV-to-film continuations do: It tells a story self-contained enough to keep even outsiders watching. Unlike Sex and the City or The X-Files or about 80 percent of the Star Trek movies, Veronica Mars keeps the story simple, but not in an episodic TV sense. Instead, Thomas is smart enough to model it on film noir stories of the ’40s and ’50s with its dark characters, conflicted hero and a twisty little plot.

The film is character and story sharp for sure, which makes up for the times it’s visually dull. Thomas isn’t a motion picture director. That’s immediately apparent. But given that he’s probably the only person on the planet who could direct these returning actors in these established roles, there’s likely more risk in cinematic overindulgence than in staying in a comfort zone.

Really, that’s what makes the film impressive. It’s also not afraid to admit when it’s making a movie for its fans. Most TV series that become movies try to find a balance between the old and the new, often awkwardly. They embrace cinema badly. Veronica Mars seems refreshingly honest in its intentions to be a fan-first movie. And its that honesty that makes the film open for any audience.

After all, the greatest thing this film has for both fans and non-fans is Kristen Bell as Veronica Mars. Her emotional journey back to the world of private investigating and potentially back into the arms of her ex is actually stronger and more realistic than her series arcs. Having the sassy, super-smart female detective take center stage is essential. Maybe if there’s a Veronica Mars 2, Thomas can be a little more visually adventurous. Until then, this film achieves what it wants and needs to achieve: Re-introducing Ms. Mars to the world.

Dan Stasiewski is a chronic cinephile and an unapologetic fan of high school dramas on screens big and small. You can find his work at The Film Chair, where he is the editor-in-chief. This article originally appeared on The Film Chair and is reprinted here with permission.