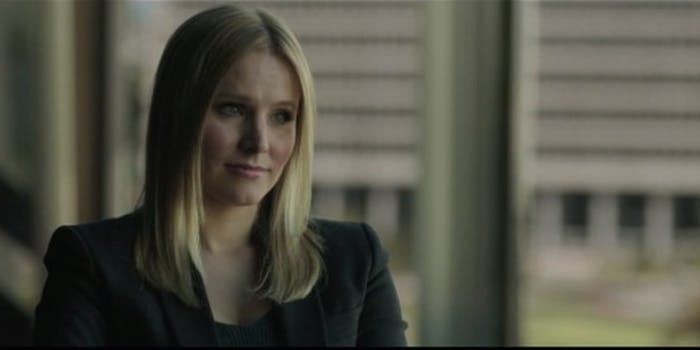 Watch the first footage from the “Veronica Mars” movie

The first teaser for the Kickstarter-funded film premiered at San Diego Comic-Con.

Veronica Mars‘ record-setting $5.7 million Kickstarter campaign set off a wave of similar big-name online fundraising campaigns. A little more than three months after the campaign ended, the first footage from the Veronica Mars film has been released during a panel at Comic-Con.

The Comic-Con featurette includes a behind-the-scenes look at the film and the groundbreaking project that spawned it, and it concludes with a brief trailer­. Of course, since the actors are now nine years older than when the show first began, the titular leading lady can’t be a high school wunderkind anymore. Instead, Kristen Bell will have to settle for playing a plain old TV adult genius.

During the behind-the-scenes portion, viewers get to see the moment creator Rob Thomas actually pushed the Kickstarter campaign live and set this whole trend in motion. Thomas calls the film “the little movie that could,” which seems a little silly when there are many other projects on Kickstarter that aren’t considered cult classics.

The Veronica Mars movie will arrive in 2014, at which point it may be a relic of another era; after the heavy criticism Zach Braff endured during his Wish I Were Here campaign, multi-million dollar Kickstarter campaigns will probably remain rare. Veronica Mars‘ place in history, however, shouldn’t be dictated by the trend it kicked off. On its own, it is proof of the Internet’s ability to fund a film that looks and feels just like a studio picture.

Plus, Kristen Bell is still super sassy. Even the 90-second sneak peek makes that clear.