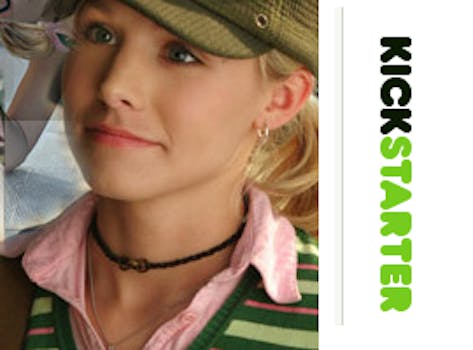 Earlier today, screenwriter Rob Thomas launched one of the most ambitious Kickstarter projects in history.

Earlier today, screenwriter Rob Thomas launched one of the most ambitious Kickstarter projects in history: an all-or-nothing plea to his fans to turn the cult TV hit Veronica Mars into a feature film. With a goal set at $2 million, the second-loftiest ever, Thomas described the project as fans’ one shot to see the movie become a reality.

The all-or-nothing gambit has paid off: In just over four hours, with 14,000 backers, the Veronica Mars Movie has broken records for the fastest Kickstarter project in history to break $1 million. It defeats its predecessor, the video game Torment, by a handy two hours.

On the Kickstarter’s home page, Thomas commented that despite Veronica‘s heartbreaking third-season cancellation, and a previous lack of interest from rightsholder Warner Brothers in making the film, studio execs were fine with allowing fans to have a share in backing the movie. “Their reaction was, if you can show there’s enough fan interest to warrant a movie, we’re on board,” he wrote. “The average pledge on Kickstarter is $71. The most common donation amount on Kickstarter is $25. Surely, 80,000 of our three million viewers would find that price-point viable!”

It looks like Thomas’s calculations were spot-on. Around 13,900 people contributing to hit the $1 million milestone, which averages out to about $71 exactly. The top donor level, a $10,000 slot that gives you a walk-on role in the show, was snapped up early, leading to speculation about which rich Hollywood star could have gotten in the game. (Cameo from Meryl Streep or Paul Rudd? Dream big, we say!)

Thomas has promised a film noir that brings Veronica back to the small California town of Neptune to solve her darkest case yet.  “I promise if we hit our goal, we will make the sleuthiest, snarkiest, it’s-all-fun-and-games-‘til-one-of-you-gets-my-foot-up-your-ass movie we possibly can,” wrote Veronica Mars star Kristen Bell, who’s long been on the record about how much she would love to play the amateur detective again.

But of course he’s aware that plenty of his fans will be watching to see how (or if)  the rocky romance between Veronica and Logan will finally be resolved. “I pledged, and I was thrilled to do so,” commented backer Sarah Patankar.  “But if Logan and Veronica don’t get together, I want my money back. Tumblr immediately burst into a flurry of Logan/Veronica Gifsets and boundless excitement. “I THINK WE WANT THIS MOVIE YOU GUYS,” gushed figsandtea. “I THINK MAYBE WE DO. YES?”

With the goal looking like a certainty, now fans are already discussing what the overflow cash will bring. “Stretch Goal—At 3 Million we film a scene between Kristen Bell and Sloths,” joked backer Christopher Rider. The highest funded Kickstarter ever was a smartwatch that raised over $10.2 million. Will Veronica top that? Thomas promised to “figure out something cool” if fans boosted the series that far—but the huge Bollywood dance number he joked about is unlikely.

“It’s nerve-wracking,” Thomas wrote in his passionate letter to fans. “I suppose we could fail in spectacular fashion, but there’s also the chance that we completely revolutionize how projects like ours can get made.”