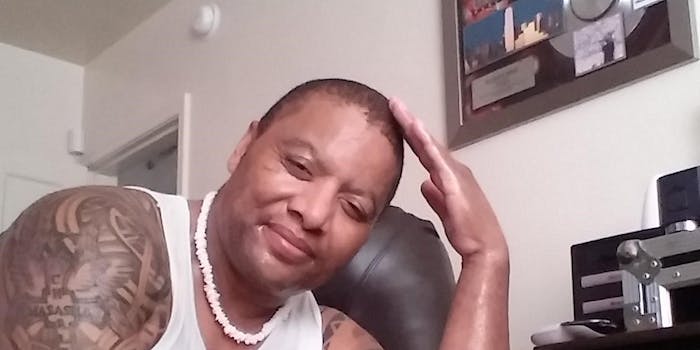 Twenty-five years after 'Ice Ice Baby,' DJ Deshay has not been given his due. He hasn't forgotten.

For almost as long, I’ve been obsessed with a mysterious former associate of Vanilla Ice. The name might ring a bell, too, as “DJ Deshay” is referenced in a noticeable amount of Vanilla Ice tracks.

In “Ice Ice Baby,” Vanilla Ice raps, “Shay plays on the fade, slice like a ninja / Cut like a razor blade.” And also, “If there was a problem, yo, I’d solve it / Check out the hook while Deshay revolves it.”

Deshay is mentioned again in the Vanilla Ice song “Play That Funky Music”: “Well that’s my DJ Deshay cuttin’ all them Zs / Hittin’ hard and the girlies goin’ crazy.”

He is mentioned yet again on “Dancin’”: “People under 40… Yo! Let’s get down / Because they need more break and now it’s sliced by Shay / The record’s out so don’t wait.”

Who is Deshay? Why has no one in the last 25 years penned a definitive explainer of Vanilla Ice’s right-hand man? Is it because people have mortgages and care about things happening now and not things that happened 25 years ago? That’s a terrible way to live.

After fervent searching, I found Deshay camped out in the comments of Vanilla Ice videos saying that he would like to work together again. All I could glean from the sparse information on the Internet was that Deshay was formerly affiliated with Vanilla Ice and Usher.

“I thought you were a crazy lady who’d gone off her meds,” Deshay says the first time we speak.

He’s had a storied career. He’s still in entertainment. Most urgently, his YouTube channel is a gift. He has a tutorial where he tells us how to make a Velveeta cheesy casserole chicken pot pie.

He has another video where he apologizes to all women he’s dated “DJ style” at 3:45am.

He’s a fan of SpongeBob Squarepants. He has not one, not two, but three videos where he praises prune juice. He is generally a proponent of unhindered poops. He wore a tutu and butterfly wings to Let’s Make a Deal. 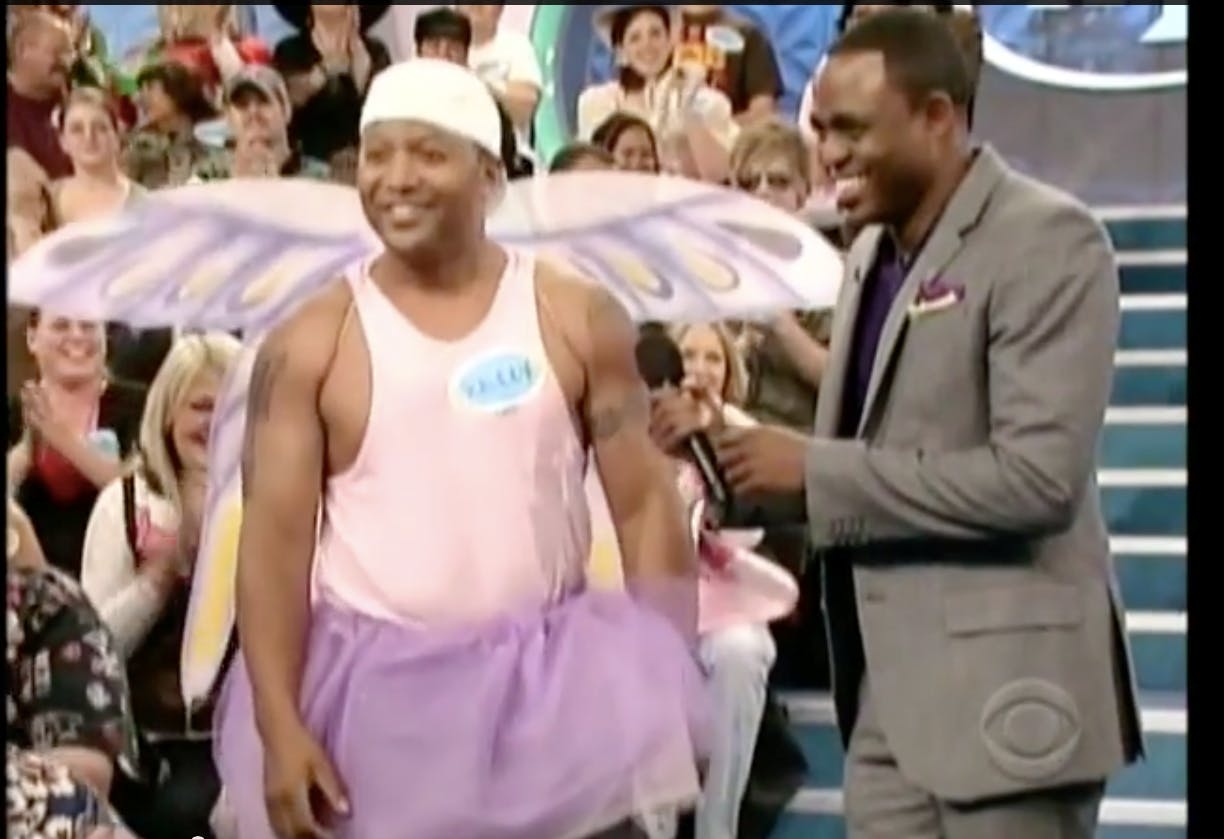 But that’s not all. Forty-eight-year-old Renaldo Kelly, also known as DJ Deshay, also known as Shay, also known as Deshay Boogiedown, is from Hawaii, lives in Los Angeles, and works three jobs: Costco, delivering pizza, and DJing at a strip club, obviously. (Strip clubs pay more than dance clubs, he says.) He still makes beats and is still trying to make it in music, which he says is his ultimate passion.

Deshay tells me he met Vanilla Ice while DJing in a club called City Lights in Dallas back in 1988, which was owned by Vanilla Ice’s manager Tommy Quon. Vanilla asked him to play one of his songs, but according to Deshay, didn’t ask very nicely. After Vanilla tried to reach over and force Deshay to play his cassette, Deshay shoved him away, and Vanilla “did the Karate Kid pose.” Deshay laughed and threatened to kick his ass, and Vanilla said he’d wait for him outside.

Vanilla goaded, “Motherfucker, do you know who I am?”

“I said, ‘Who the fuck is this?’ and someone said ‘That’s Vanilla Ice.’ I said, ‘I don’t give a fuck if that’s Chocolate Swirls, if you reach over here you’ve lost your mind,’” Deshay says.

Vanilla’s manager sensed the apparent chemistry between the two hotheads and suggested that they both work together. Why did Deshay agree to do it? Well, money.

“I said ‘Hey, can I borrow your car to go across the street to get something to eat?’” Deshay remembers, laughing. “I jumped in that fucking car and drove home.”

“What the world don’t know,” says Deshay, “is it’s like we created Frankenstein. Vanilla Ice was not a rapper. A guy named Chocolate wrote the lyrics, and me and Earthquake did the beats. We put [Vanilla Ice] together. My little brother Jake taught him how to dance back in 1988.”

Deshay emphasizes that he and Vanilla Ice never fell out, but that due to poor management, they stopped working together. The story according to Deshay goes like this:

While in Alabama before going on tour, Vanilla Ice’s managers realized they couldn’t afford touring with two DJs—Earthquake and Deshay—so they decided to send Deshay home. Earthquake broke this news to Deshay by telling him that the managers wanted him to take a bus back home and that they needed his turntables. Deshay refused, and they had a physical scuffle until the bouncers broke it up.

“I went back to the hotel, went to sleep, woke up in the morning, stole a car, and drove back to Dallas, Texas,” Deshay says.

Deshay mentions stealing a car with the same nonchalant inflection one uses to describe brushing teeth. I interrupt.

Deshay tells me that it belonged to some groupies who followed them around everywhere during their promotional tour.

“I said ‘Hey, can I borrow your car to go across the street to get something to eat?’” Deshay remembers, laughing. “I jumped in that fucking car and drove home.”

He left the car in a mall parking lot in Fort Worth, Texas, and went home to Dallas.

“I’m not fucking Leave It To Beaver, I’m not getting on no goddamn bus. So I stole a car like a real, true G.”

After being dropped by Vanilla Ice’s management, Deshay was signed by Tabu A&M Records and released an album with (recently deceased) DJ Curly called R&B Style. Deshay says the album didn’t go anywhere, but it features a song called “No Ice In My Drink.” (Yes, he means the Vanilla type of ice.) The single was “Funny Feeling,” and it’s a forgotten new jack swing classic. 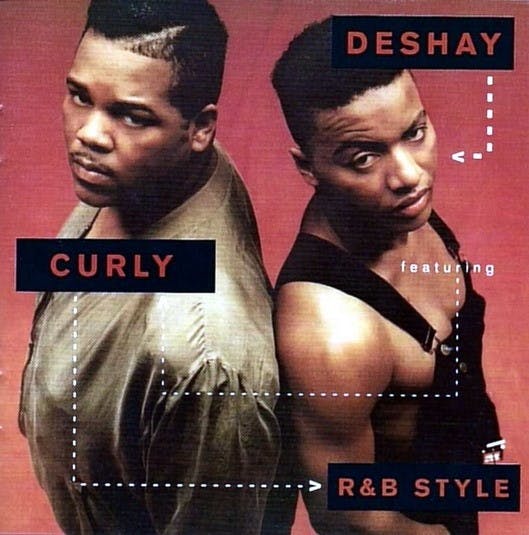 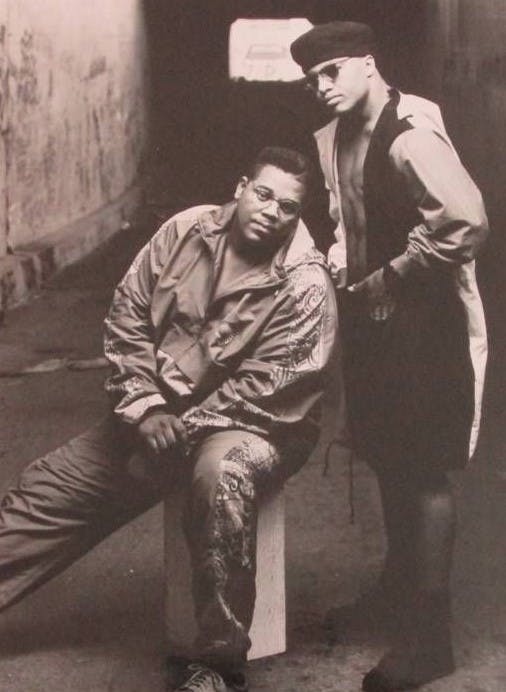 Deshay later began DJing for Usher from 1995 to 1997. Similar to the Vanilla Ice situation, while having no problems with Usher himself, management casually dropped him.

He claims to have accidentally obtained an Usher sex tape. Deshay says Usher asked him to transfer it off of his mom’s camcorder to a VHS, and apparently Deshay did this and it eventually got mixed up with his own belongings. Deshay says he found it later in a box of VHS tapes when he moved.

He seems to have every desire to return the alleged tape. But it also seems like it’s a foot in the door—leverage toward potentially working with Usher again.

Deshay has been trying to get in touch with Vanilla Ice for the past 25 years, and he says that every time Vanilla Ice came into town the bouncers would intervene and say Vanilla didn’t want to talk to him. In April at a Vanilla Ice show, Deshay finally made it happen.

I ask Deshay how it went: “He sounded like he wanted me to suck his ice ice dick.”

Although Vanilla himself didn’t know Deshay was coming, Deshay had been in touch with his management and they encouraged him to come along. Deshay says that he was greeted with a hug, but overall he considers the reception to have been cold because Vanilla seems to think money is too tight to consider working together again.

Vanilla Ice let Deshay stand on the side of the stage during the show, but he didn’t introduce him as his original DJ or let him perform. Even though Vanilla Ice suggested they get together sometime, he wouldn’t give him his phone number, telling him to get it from his manager (who then told him Vanilla Ice doesn’t like to give out his phone number).

“He’s been arrogant from day one, nothing has changed about him. He wants me to kiss his ass. I’m 48 years old, I don’t kiss ass, I kiss cash.”