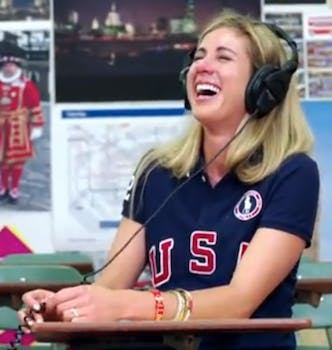 If Cockney impressions were an Olympic sport, the Americans would dominate for all the wrong reasons.

A United States Olympic wrestler says she knows that “people in London talk funny,” but does she know that the Cockney dialect she’s speaking of actually has specific social and geographic ties?

There’s a working-class culture in East London that seems to gravitate towards that thick, raw, often uninterpretable style of speech that Guy Ritchie and your drunk college friends both love to employ.

To get themselves in the London spirit, a gaggle of U.S. Olympians took to the classroom to try their hand at the infamous Cockney accent. Their efforts are both hilarious and unfortunate, but in the end, one thing was true: Our country should be grateful that Cockney impressions is not an Olympic sport. If it were, the Americans would dominate for all the wrong reasons.

The Daily Dot sorted through the wreckage and found a few Cockney offerings deserving of distinction. Our awards below. Let the games begin.