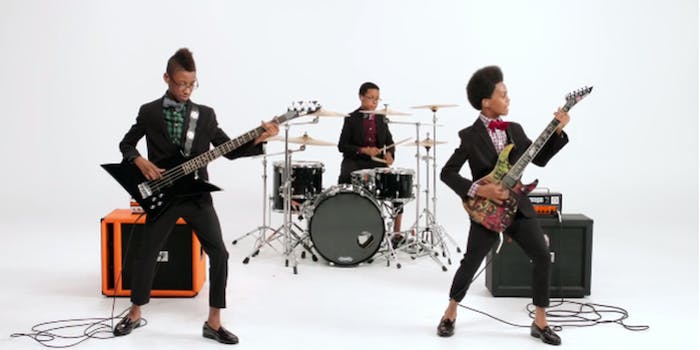 What were you doing in eighth grade?

Two summers ago, a YouTube clip of NYC metal band Unlocking the Truth performing in Times Square started making the rounds. Last spring, another clip went viral. Fast forward to summer 2014, and the eighth graders have just signed a $1.8 million deal with Sony.

In the two years since their clips went increasingly viral, Unlocking the Truth—comprised of 13-year-old guitarist Malcolm Brickhouse, 12-year-old drummer Jarad Dawkins, and 13-year-old bassist Alec Atkins—was featured at Brooklyn’s Afro Punk Festival and Coachella, and in a Cole Haan commercial, which no doubt got more eyes on the group.

According to Rolling Stone, the deal with Sony includes five albums a $60,000 advance. However, they’ll allegedly only see profit if their first album sells more than 250,000 copies, which is not easy for a young band—especially when its members are not even in high school yet, and might not have the time to devote to promoting and touring. An industry expert told the New York Post that goal is “extremely high.” The Sony contract also had to be submitted to a Manhattan judge, since they’re minors.

The group’s manager, Alan Sacks, was contacted after a Sony exec saw one of their viral clips. Sacks claims they’ve nabbed a big-name producer for the album, but won’t reveal who. He adds they’ll start recording once the group’s done with Warped Tour. What are you doing with your summer vacation?