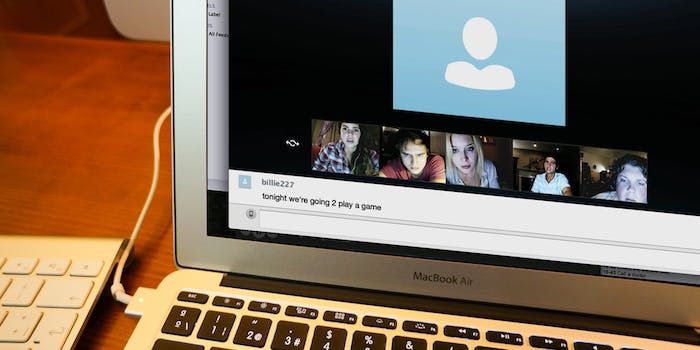 ‘Unfriended’ will make you scared of the Internet

It's a scary movie about the Internet made for people who love being on it.

This obsession is the premise of Unfriended, an Internet horror movie premiering at South by Southwest this weekend. (It premiered at SXSW on Mar. 13, with additional showtimes available. You can catch it in theaters beginning April 17.) 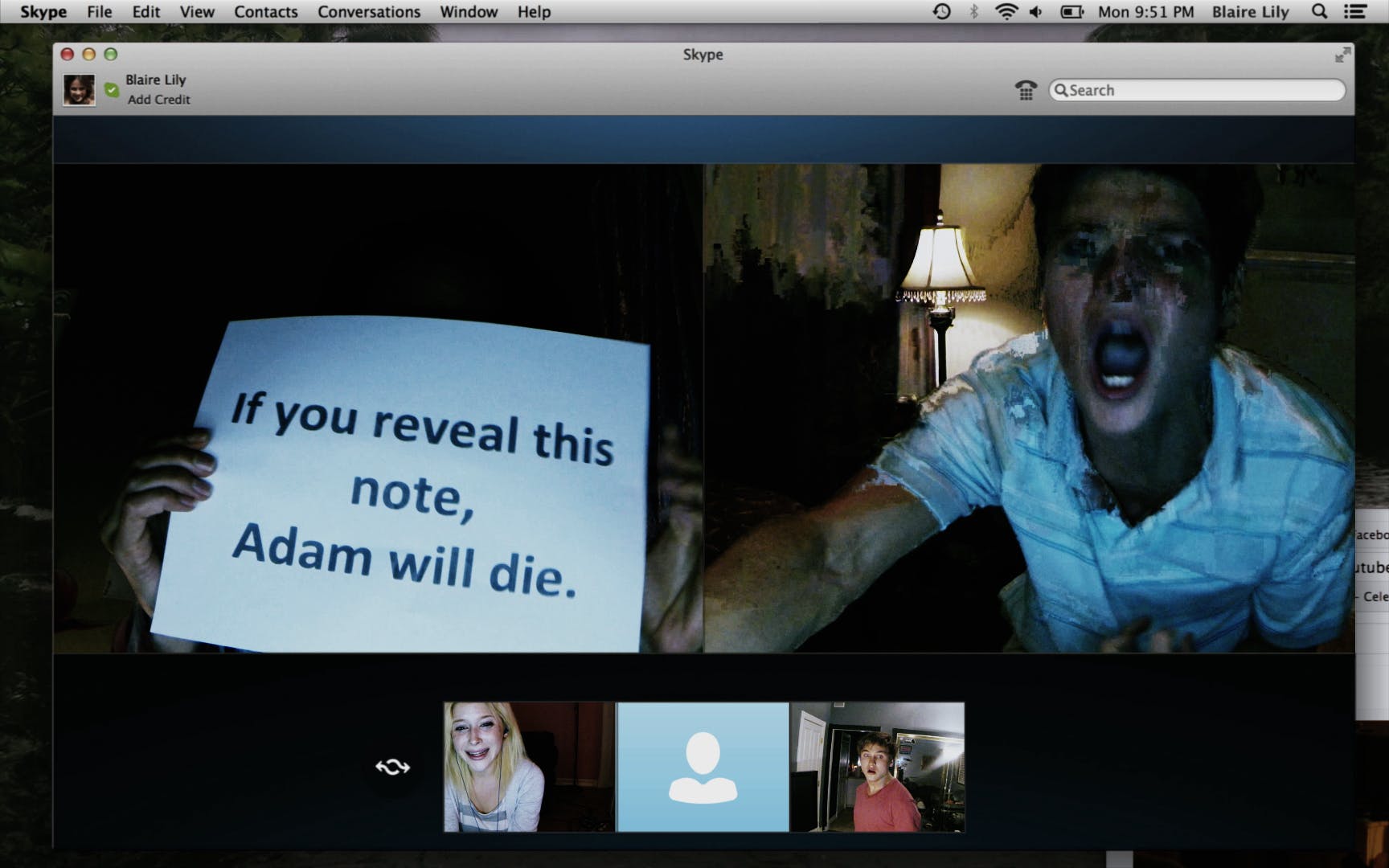 The plot is disturbingly relatable: A scandalous video of a drunk girl’s shenanigans is anonymously uploaded online. The barrage of unforgiving remarks and slut-shaming cause the video’s subject, Laura Barns, to commit suicide. A year later, a Skype video chat between a group of Laura’s former classmates is interrupted by an unknown presence, and it wants revenge.

To discuss the making of the film, Nelson Greaves—writer and producer of Unfriended, who is currently at SXSW for the movie’s premiere—agreed to, quite appropriately, hop on a quick Skype call with the Daily Dot. 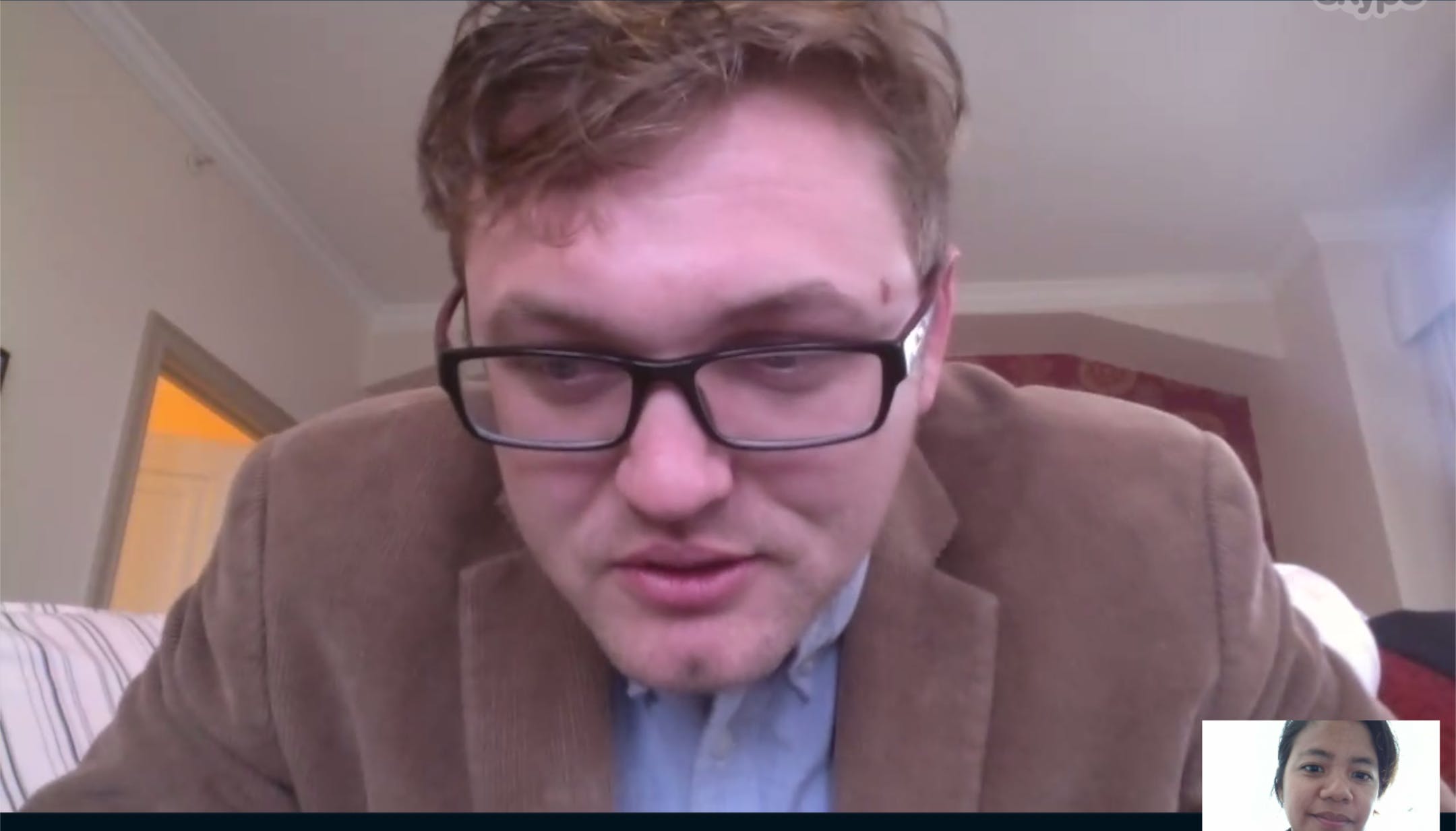 “This movie is based on a long-time idea of my fellow producer Timur Bekmambetov, with whom I’ve worked with for almost five years,” says Greaves. “‘We should make a movie that’s just on the computer,’ he says. Everyone told him he was crazy, but it made sense to me. I’ve literally seen him on set yell ‘Action!’ while shooting a scene, and as soon as he cuts, he looks down at his computer, where he has another set of people on Skype, to participate in another meeting. He does this while he shoots a movie.”

This epitome of Internet age multitasking became the start of the film. “One night, we were sitting in an office, throwing ideas around, and it suddenly clicked for me. Oh my gosh, what if this were a horror movie? The idea to use the containment of the computer and the limitations to horrific effect suddenly made sense to me.” 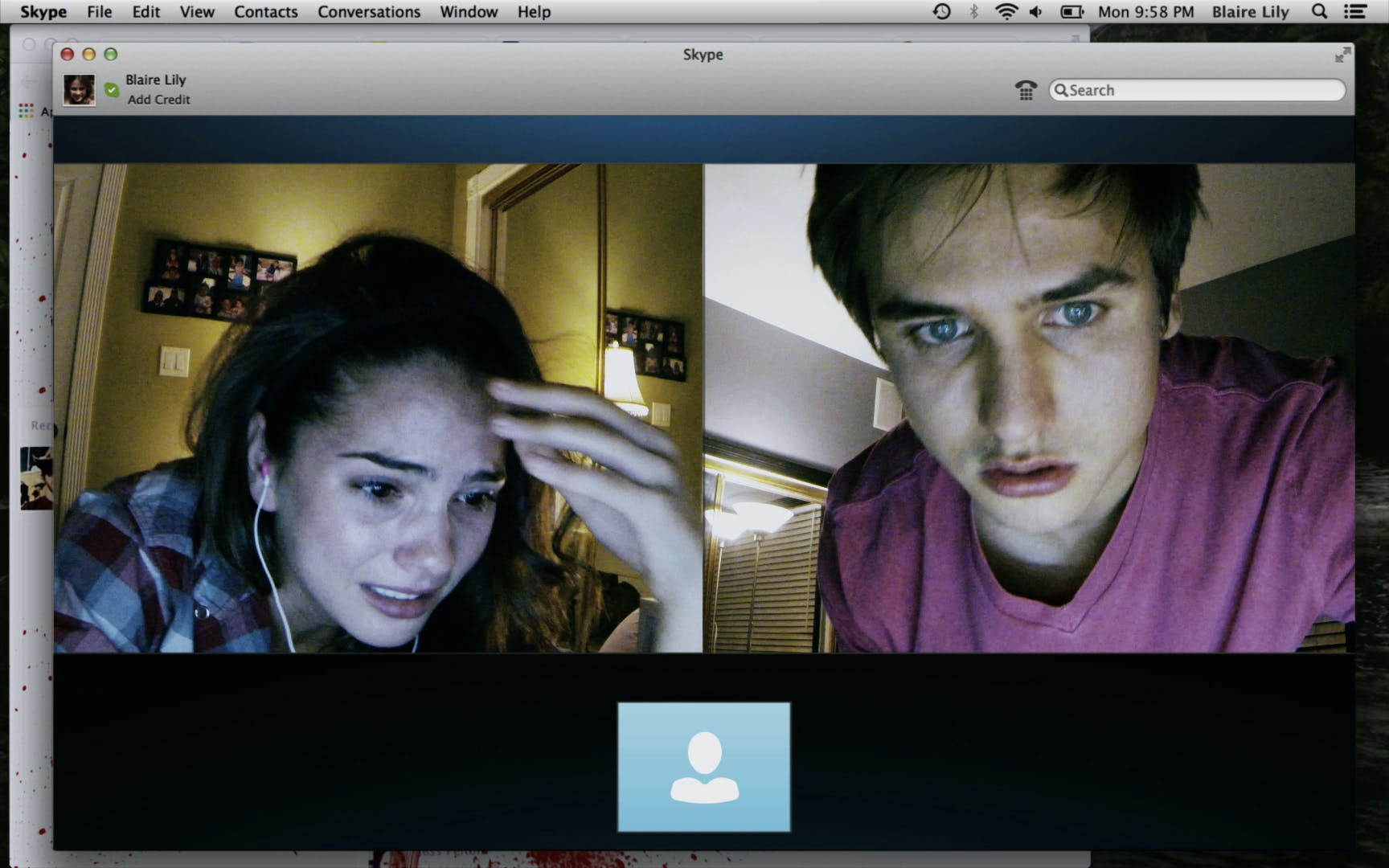 Since every scene of Unfriended happens within the frame of a computer screen, you might assume it would be an easy movie to direct and create; after all, there’s no location challenges. But Greaves says otherwise.

“I wrote the first draft of the movie in two weeks, so very quickly was it written. However, we worked post on it for over a year and a half,” he explains. “It’s easy to hit ‘capture’ on a computer screen and grab things that are happening. What is very difficult, it turns out, is to have access to all those elements and be able to manipulate them and use them in a way where you can design and choose how you’re telling the story. It’s actually enormously complex—this being somewhat of a new language, we took time to discover how to use those tools and arrange all the elements in a gripping and meaningful way. It took us time to get it right.”

An earlier version of Unfriended, then titled Cybernatural, was shown last summer at the Fantasia International Film Festival, where it was well-received. According to Greaves, that earlier exposure gave the production team the necessary boost it needed to get back to work and make adjustments to improve the film. The movie SXSW attendees will see is an improved version of the early work, with a little bit more attention to detail as well as new scenes and effects the team was able to add.

The trailer is like a cyberbullying highlight reel, but the purpose is to bring attention to this very pervasive problem. “It’s a very serious issue that’s not quite on people’s minds,” comments Greaves. “People don’t really know what to do about it. What’s interesting about cyberbullying is that it’s kind of the democratization of bullying.”

While Unfriended is ultimately a horror film, its creators want to cast cyberbullying as the real horror. “We all have stories that we’re sharing on the computer, and most of these stories relate to experiences that we have in private,” Greaves explains. “Unfriended exposes these stories in a manner similar to how actual people express themselves in an online public forum while also holding back certain details, and it allows viewers to see all sides of their own experience come to life on the big screen. People are going to connect to the movie because of that.”

Unfriended is just the most recent in a line of social media horror films, a new genre designed to trade on our digital era terrors. It uses the found footage style popularized by the likes of The Blair Witch Project and the Paranormal Activity franchise, with the hopes of eliciting realistic fears. 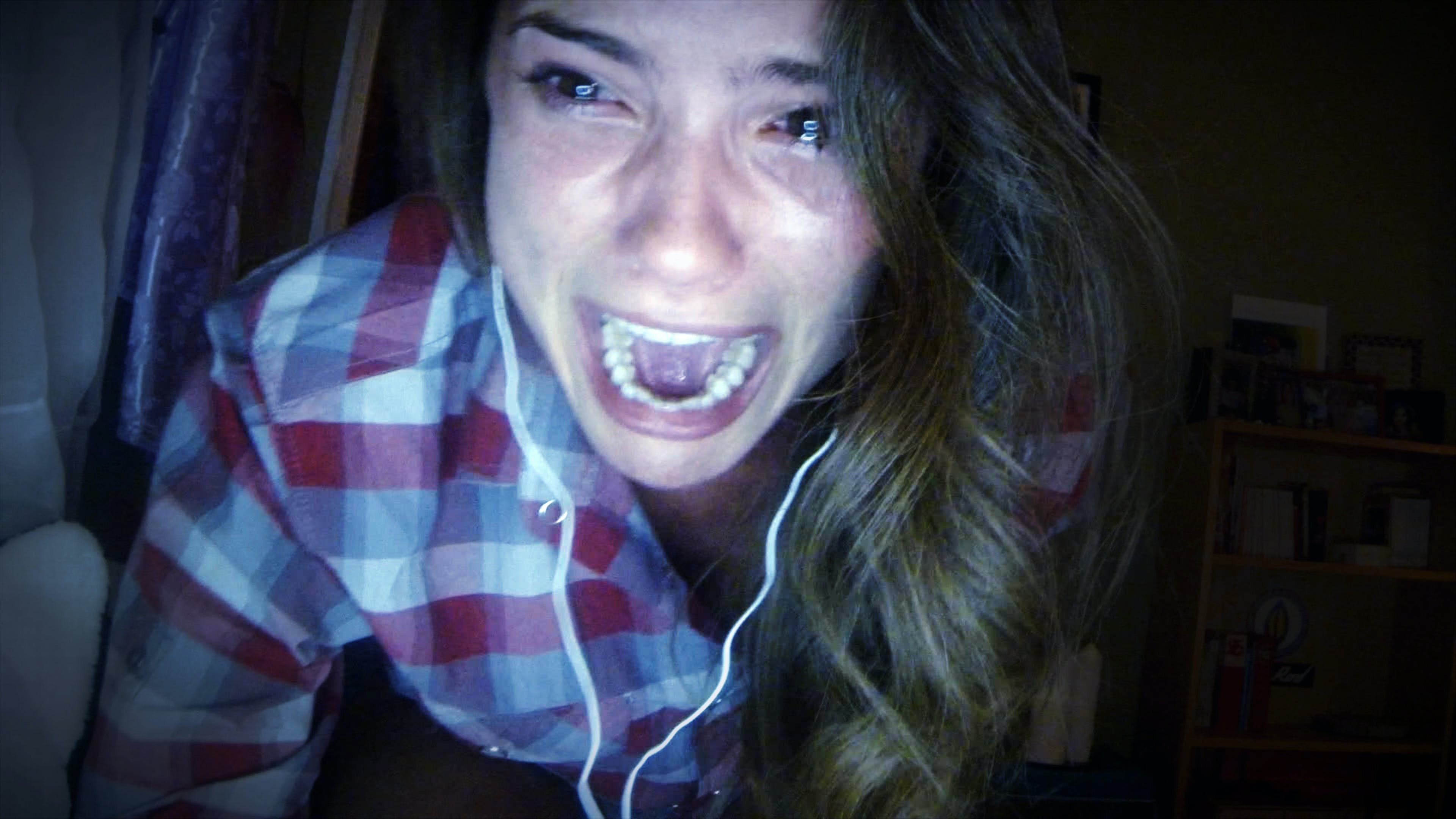 “The horrors of the Internet is something we’re all regularly subjected to because we all use it everyday in such an enormous way.”

“I definitely think [the movie industry] is just arriving at a stage where the paranormal infiltrating the online world is considered an acceptable premise,” says Greaves. “The horrors of the Internet is something we’re all regularly subjected to because we all use it everyday in such an enormous way.”

Unfriended also wants us to know that it’s not just regularly sexting teens who need to be afraid; it’s all of us. “It’s not just 15 year-olds on Facebook, but grandparents as well,” Greaves continues. “These different age ranges are subjected to the same amount of vulnerability online. Nude photos of 19-and-20 year-olds may leak, but so do nude photos of people over 50. In the age that we live in, these rules affect us all.”

Is that a promise or a threat?

Photo via Antonio Tajuelo/Flickr (CC BY 2.0) | Remix by Jason Reed