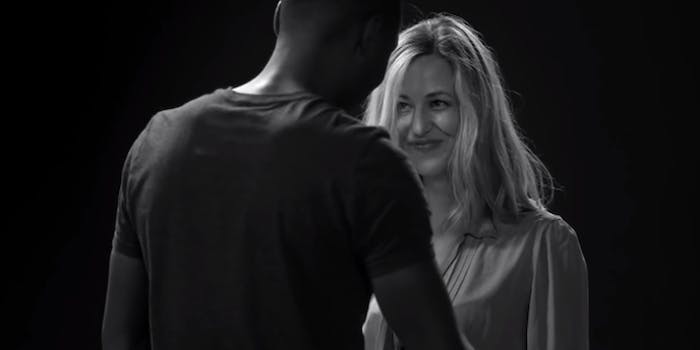 The director behind ‘First Kiss’ asked strangers to undress each other

You’ve probably seen “First Kiss,” the video of strangers kissing, which went viral back in March. You probably saw the subsequent spoofs, too. Now the filmmaker behind that clip has asked strangers to undress each other on camera.

Season 2 of Showtime’s Masters of Sex debuts tonight, and Tatia Pilieva created this new video, “Undress Me,” in collaboration with the show. In the video description, she explains, “I asked strangers to undress each other and get in bed. Nothing else. No rules.” It’s also explained that this clip celebrates the groundbreaking work of William Masters and Virginia Johnson, the sexual response researchers the show is based on.

After “First Kiss” was revealed to actually be a clothing ad featuring models, many people felt the clip was a bit disingenuous. “Undress Me” is certainly more upfront, though it’s no less awkward. (Don’t get your hopes too high: they only get down to their underwear.)

Still, I thought there’d be at least one person who tripped trying to take of their pants, or got their shirt stuck over their head. I guess having the lights on helps.