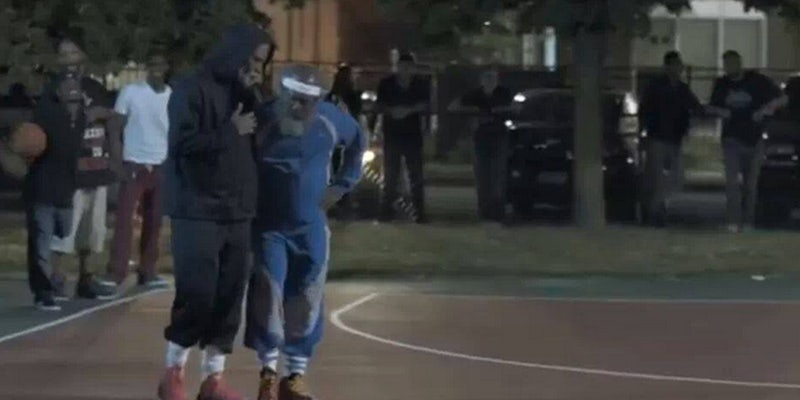 Kyrie Irving’s slam-dunking grandpa is back, and he brought a friend

It's a commercial, yes, but it's a really, really good commercial.

It’s a commercial, yes, but it’s a really, really good commercial. So good, in fact, that you could consider it revolutionary. Pepsi, the mega-huge soda company, has found a way to push their product through what’s quickly becoming a captivating kind of narrative: longform stories laid out sequentially on YouTube.

That narrative follows the story of Uncle Drew, an grizzled basketball player impersonated by Cleveland Cavaliers wunderkind point guard Kyrie Irving. The series first popped up on the blackcourts last May and found Drew, grey in the beard and ratty in the sweatpants, recapturing his affinity for basketball and relearning how to, well, play the game like somebody who plays for the Cleveland Cavaliers.

That first installment hit gold on YouTube, to the tune of 27 million views. A second episode pulled in 3 million last Halloween.

Yesterday, Pepsi released its third chapter, which has already accrued more than 1.3 million views. This round, Uncle Drew’s trying to band his old teammates back together, and he’s brought along quite the cast, including WNBA star Maya Moore and Denver Nuggets point guard Nate Robinson.

“Basketball isn’t a game,” Uncle Drew says. (Irving himself wrote and directed the spot.) “It’s an art form. You master the fundamentals so that you can improvise; so that you can concentrate on what really matters: getting buckets.”