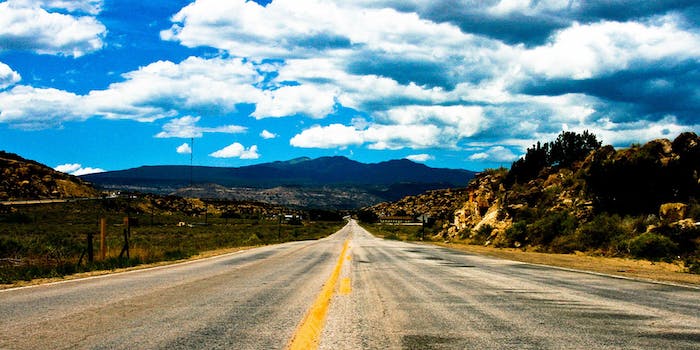 Here's a musical roadmap of (and tribute to) iconic destinations captured in song.

For 60 years until its decertification in 1985, U.S. Route 66 was considered by many to be the Main Street of America. Running from Los Angeles to Chicago, the 2,451-mile stretch captured the vastness of American geography—crossing beaches, mountains, desert, and the heartland—before settling in our nation’s Second City, the adopted mecca of American blues.

It’s one of many stops on our ultimate summer playlist, a musical roadmap and tribute to iconic destinations captured in song. This isn’t your father’s mixtape, though. It’s a Spotify album full of contemporary cuts by the likes of Band of Horses, Black Joe Lewis & the Honeybears, and Justin Vernon’s the Shouting Matches. It’s meant to be played loud, with windows down, and for long stretches of open road. Tune in, tune up, turn up, and drive.

Our summer road trip starts in Texas, where the Daily Dot resides. From there, it chases sunshine west, cruising around the Lone Star State before knocking off to New Mexico and California, home to both “Green River” (the Credence Clearwater Revival classic takes its name from a river in northern California) and Buck Owens’ Bakersfield.

From there, it’s straight onto that Route 66, a road that spawned the birth of one of music’s most memorable anthems, before linking up with Route 61 outside of Illinois. Surely, its appropriation needs no clarification.

Once you’ve reached the bottom, and matched eyes with that beautiful bayou in New Orleans, it’s back up through the great American south, cruising past “Tennessee,” “Carolina,” and on your way to Asbury Park, N.J., the home of Bruce Springsteen. Nothing in this world sings “Summer” like the Boss.

The songs on this playlist don’t just bear names that fit within a roadmap; each embodies the spirit of its city or states in a way that can only be accomplished through melodies and lyrics. Doug Sahm’s “(Is Anybody Going To) San Antone), for example, sounds like it was served up on a pan fryer, while can hear the expansiveness that surrounds “Gallup, NM,” and the back porch swing that shakes Bob Dylan’s “Nashville Skyline Rag.”

It’s a tour of our country. Go on and get your kicks.