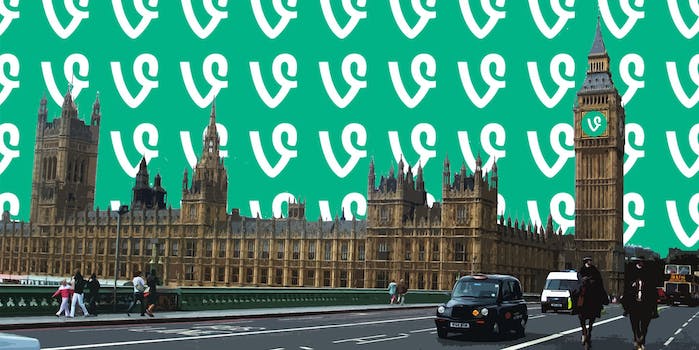 At London’s Vine meetup, things got ugly in seconds

Who'd have thought a Vine meetup would end in violence?

Last Saturday, London’s Trafalgar Square played host to the absolute high point of the British social calendar: the 2014 British Vine Meet. Billed as featuring Vine stars like Daz_Black, Arran Crascall, and more, a screaming horde of British viners descended upon the historic square on May 31 to meet their digital heroes, socialize, and—most importantly—record it all in six-second snippets.

Vine lets users post and comment upon video clips that last for precisely six seconds. This rapid pace produces a kind of social media hyperconsumption, where content is devoured near-instantly, as users flit from one vine to the next. As we were to discover upon meeting the site’s most prolific members, the platform does not exactly breed subtlety.

The meetup was easy to find—one crowd member was handing out what appeared to be Vine-star Top Trump cards. It certainly had a unique feel to it: There are very few events other than ComicCon that could bring together a similar batch of giggling 13-year old girls, socially awkward teenage boys, and heavily tattooed millennials, along with a spattering of almost impossibly loud and brash 20-somethings.

The Vine stars held court at the center of the crowds, basking in the warm glow of a thousand Vine selfies, listening to their catchphrases and personal hashtags repeated ad nauseum—like a Vine video.

After a few brief chats with regular attendees, we quickly gravitated towards the Vine royalty. It was time to interview the best and the brightest the U.K. Vine scene has to offer, the crème de la crème—and what better way to do this than via Vine?

Daz_black here is lauded for being the first British Vine user to reach 1 million followers.

This Vine user claims to have earned hundreds of thousands of followers thanks to his ability to shout “Pussy” unexpectedly. Nobody at the meetup seemed to have any idea who he was.

The unironically named dapperlaughs (famous for his catchphrase “#Moist”) was apparently the biggest big deal of all, consistently drawing the largest crowds and orchestrating the most extravagant group selfies. However, when we finally got to talk to him, the drawbacks of an app that caps videos at six seconds became apparent. I guess we’ll never know what everybody loves.

Our favorite was easily Vine wunderkind Toby Randall. Just 12 years old and with the angelic voice of a choirboy, it’d be easy for appearance requests from the Ellen DeGeneres Show and his absurdly high follower count (898,000 and counting) to go to his head.

But stopping him going full-Bieber is his father Barrie, who keeps him grounded by laying strict ground-rules—including not reading the comments on videos (some are “incredibly cruel”), and not allowing Toby to install the Vine app on his personal phone.

Trafalgar Square security was unimpressed by the incredible social media prowess on display, and over the course of the afternoon the group was forced to move several times before finally coming to rest in the shadow of the National Gallery.

This didn’t stop the assembled Vine users doing what they came to do: make highly self-congratulatory vines, and lots of them.

It all got a bit unpleasant, however, when some Vine fans stumbled across a sleeping homeless man. Rather than leave him be, they embodied all the worst elements of the Vine community’s fetishisation of quick-shock humor: They woke him up to capture his startled reaction for a video.

To their credit, other Vine users showed concern, including a girl who sat and talked with him for several minutes to make sure he was OK. Most people though seemed to make things worse, including (and often while filming) offering him packets of mixed nuts left over from some vague “awareness-raising” event about testicular cancer that the Vine celebrities had organized earlier.

From there matters only deteriorated further, as the disorientated homeless man was goaded into a fight by one of the bracelet-selling street vendors in the square. As he mocked the homeless man’s feeble punches and danced around him, dozens of Vine fans gathered in a circle laughing, and—of course—taking vines.

Only one women said anything at all; she was promptly ignored.

Eventually, the Vine meetup clashed with the Syrian Solidarity Movement, which had organized an international day of protests against the Assad regime. As Syrian refugees began haranguing befuddled tweens and hipsters, the Vine stars slowly retreated to the safety of the National Gallery.

If we learned anything from this Vine meetup, it’s that some things really are better experienced in six-second increments. At least then it’s over faster.

Photo via Carlesmari/Wikimedia Commons (CC BY 3.0) | Remix by Rob Price