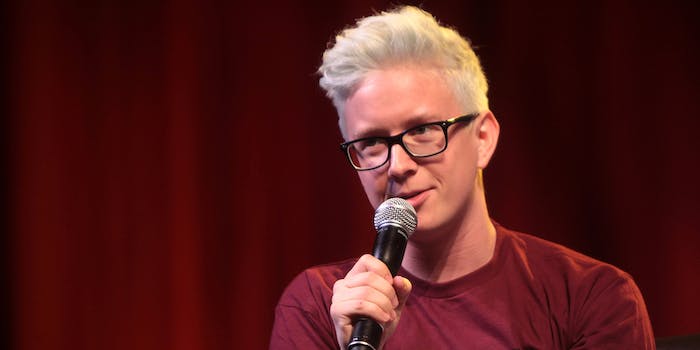 Tyler Oakley throws a Midwestern sleepover-themed show for his fans

Animal onesies and slaying abounded in Michigan and Illinois this weekend.

Hundreds of fans got the chance to experience a sleepless sleepover with their favorite YouTuber when Tyler Oakley visited Chicago and Michigan for sold-tour tour stops this weekend.

While the YouTube star has played host or guest at other events, his own Sleepover Tour was 100 percent Oakley, with a set modeled on his own apartment and the show following the casual-yet-intimate nature of Oakley’s videos that fans have come to love. Fans at both stops came prepared for the theme in animal onesies and other pajama attire, and they shared pictures and stories from their experiences on Tumblr and Twitter.

@tyleroakley so I hope you loved the scrapbook I made you bby! Loved meeting you queen ily.??😘 #TylerOakleyTour pic.twitter.com/jDBPeBkhUl

Oakley took the stage in a dinosaur onesie, and during the show he answered fans questions in a relaxed setting, telling new tales and expanding stories that he’s shared before, including one about a Grindr date in Hawaii that lead to the discovery of a dead body on the beach just days before meeting Barack Obama.

Oakley shared the spotlight with his longtime friend and collaborator Korey Kuhl, his cohost on newly launched webseries Psychobabble. He also brought his mother, Jackie, who has appeared in multiple videos, on stage at the Michigan show, revealing that he’d bought her a new stove, which prompted a resounding “aww” from the audience.

One of my favorite parts of tour is friends & family coming, seeing you all, and FINALLY getting it. Not sure it that makes sense? But yeah.

One enterprising fan uploaded the entire set from Chicago to YouTube, although it won’t be long before Oakley shares clips himself. Until then, fan-captured moments will have to suffice.

No additional dates have been announced at this time.