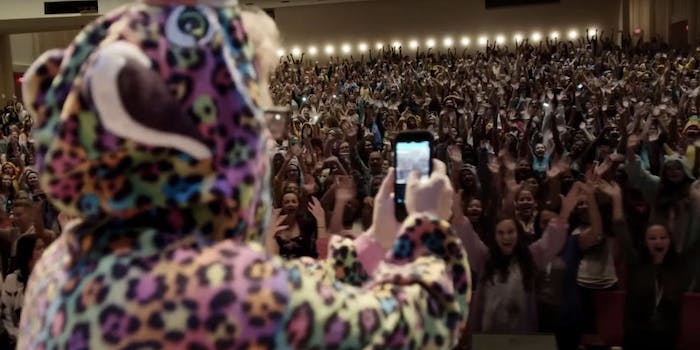 Oakley promises even more personal insight with his upcoming film.

Tyler Oakley has nothing to be “snervous” about with the release of his first documentary if this new trailer is anything to go by.

Snervous (that’s “scared” and “nervous” combined) follows Oakley’s life on the road. In the first trailer, we get a glimpse both at Oakley’s hectic tour life, as well as a few personal moments. The brief clip shows Oakley being surprised by his best friend and assistant Korey Kuhl, snapping pictures with countless fans, confronting his father over their estrangement related to Oakley’s LGBTQ+ identity, and celebrating the moment he hit 7 million subscribers (he’s since racked up another 700,000).

Oakley recently told the Daily Dot that Snervous would pick up on the emotional thread of his first memoir, Binge, which hit shelves last month.

“The movie really is a good extension of the book,” he said. “Things that I explore, whether it’s relationships or family or struggles with some level of notoriety or figuring out identity, the movie shows it.”

(The best part about the trailer? My mom is a speck in the crowd from clips filmed during the Atlanta tour stop in July, which we attended together. If you see an owl and a penguin standing together in the final film, that’s us.)

Snervous is currently available for pre-order and will be released in theaters and on video on demand Dec. 11. Until then, fans can keep up with Oakley, as always, on his YouTube channel.