On the red carpet at Tyler Oakley’s ‘Snervous’ premiere

'This feels like a celebration of Team Internet, 100 percent.'

It started raining as Tyler Oakley made his way down the red carpet last night in Los Angeles, in celebration of his new documentary, Snervous. Undeterred, Oakley spoke with big-name TV networks and smaller YouTube-based productions, eventually arriving at his fans, arms held out for speedy selfies. A bubble of photographers, assistants, and umbrella-holders stood around him, but Oakley was still the self-made YouTuber, helping videographers get the right shot. He even stopped and re-did his one-liners when they weren’t perfect.

“This is the most surreal thing I can ever imagine,” Oakley told the Daily Dot as he finished the carpet. “I’m surrounded by people who are supporting not just me, but Team Internet. This feels like a celebration of Team Internet, 100 percent. I just feel really lucky.” 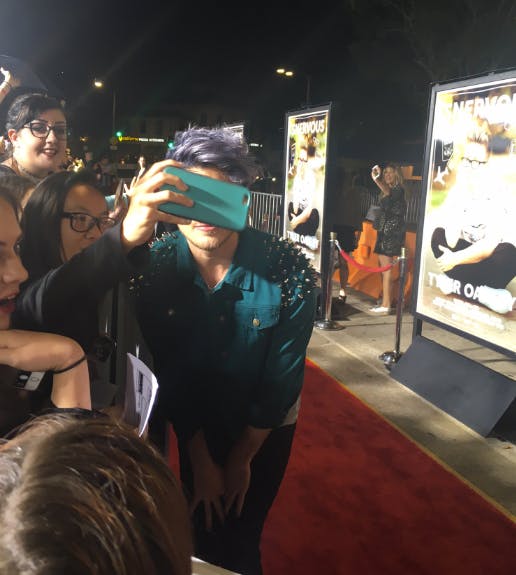 With 7.8 million YouTube subscribers, a best-selling book, and an upcoming stint on CBS’s The Amazing Race, it’s safe to say people are aware of Oakley. Now he’s releasing the deepest look into his life yet with Snervous. In a celebration of “Team Internet,” the world of successful Internet celebrities and the fans who celebrate them, Oakley hopes that allowing cameras to follow him during some of his most hectic times will give fans something his YouTube videos do not.

“Hopefully they see a new side of me, hopefully they see that there is a lot more to some of their favorite YouTubers,” Oakley explained at the premiere. “I want people that don’t know what a YouTuber is to kind of get a glimpse into that world. Because it’s here, and it’s happening. I feel like this movie is a great example of Internet and fandom, and a way to understand it.”

Fandom is front and center in Snervous. The film feels like an extended YouTube video that follows Oakley packing, sleepily traveling to Europe, and kicking off his Slumber Party Tour. Where a documentary of a musical tour might get around this by featuring a variety of songs performed as establishing footage, with Oakley we get his stage entrance on repeat, his secret handshake on repeat. The film lingers here, over-establishing Oakley’s life as a YouTuber in front of the camera, and only hints at the interesting bits. “I just want normal interaction,” Oakley explains in the doc as he walks back to his hotel room one night, after hours of meet-and-greet interactions with fans. So do his viewers.

Snervous really shines when Oakley heads home and interacts with his family. His mom, known to fans as Queen Jackie, banters with Oakley as they drive around visiting his childhood haunts, like the two fast food chains and coffee shop where he “worked every corner” in downtown Okemos, Michigan. His middle school choir teacher visits and Oakley explains how she was the one who reached out to him most effectively when he’d succumb to an eating disorder as a teen and helped him get through that time. He sits down for lunch with his biological father, who offered to “fix him” when he discovered teenage Oakley was gay, and whom he stayed estranged from for years. The lunch isn’t their first meeting—they’d already reconciled before 2015—but a chance to rehash and emphasize the fact that they’d found a way to be family and to grow. “We’re like two old bulls who stopped caring,” jokes Oakley.

Letting fans get a glimpse of the people who shaped him tells his story better than what they’ve seen on his international tour. Oakley sheds light on his relationship with Korey Kuhl, his former college RA and now production partner and de-facto personal assistant. Oakley breaks down in tears talking about their friendship, and how he both trusted no one else to help him when he realized he’d reached the level of needing it, and was terrified working together would ruin their friendship. He explains that he’d rather be Kuhl’s friend than be on YouTube, but that so far their dynamic has worked. There’s no better promotion for the duo’s upcoming stint on The Amazing Race. 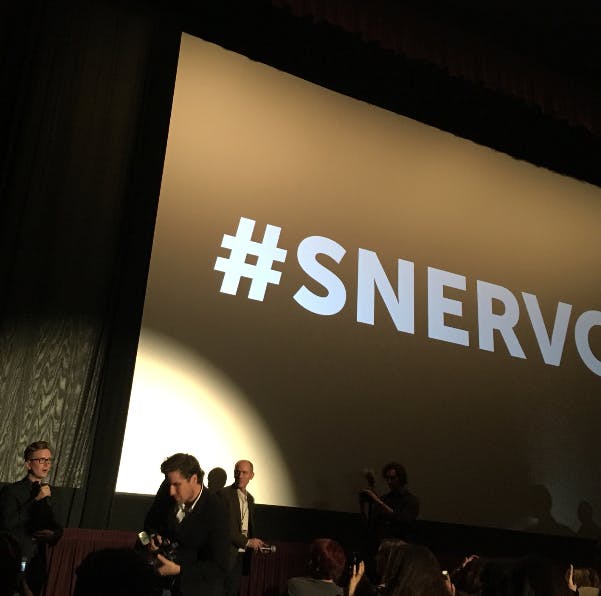 There’s also a look at the stressful side of YouTuber super-fame, in a segment that follows Oakley from a meet and greet at VidCon, the largest YouTube convention. As the official interaction ends, Oakley looks around waiting for direction as stragglers and the official photographer start to ask for more from him. Oakley doesn’t want to say no, but as soon as he’s around the curtain he’s visibly irritated and snaps at his team. Back at his hotel during some downtime, he’s even more frustrated that the original incident was caught on camera.

He explains that the frustration is twofold, both at the lack of control over his own tours and in his own personal spaces, as he attempts to give fans what they want and give himself structure. Throughout the film, fans stalk him to his hotel, wait at loading docks at venues, and pass their phones through gates to get awkward selfies with him. Oakley had written about the stress of these situations in a powerful chapter in Binge, but seeing anguish on Oakley’s face as he battles his own feelings of frustration—torn between being the best for his fans and being able to function as a human being in the midst of celebrity—is the most enduring image.

With a little less focus on the Oakley fans can already find on YouTube, Snervous would be a home run. His fans, of course, aren’t complaining about anything that gives them more to watch, and they dutifully stood on the red carpet snapping selfies with him and the rest of Team Internet, despite a rare drizzling of rain in Los Angeles.

As it stands, it’s the most genuine look at life behind the curtain of new YouTube celebrity so far, and hopefully indicative of more openness to come as Team Internet becomes simply the new normal.