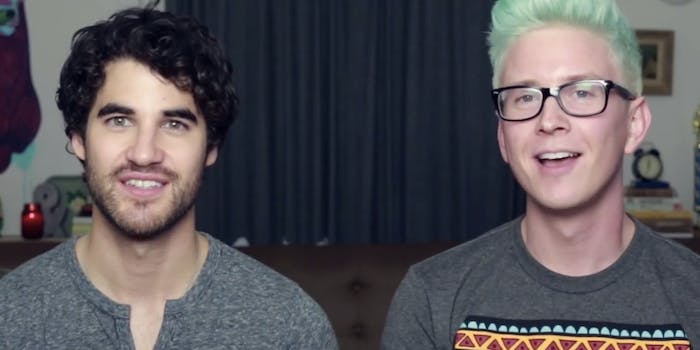 Tyler Oakley talks about Darren Criss and the guests of Auguest

Oakley takes collabs to another level with his monthlong project.

Collaboration is a core of the YouTube experience, and Tyler Oakley takes each August to celebrate that with his annual Auguest, a month of collaborations between Oakley and a rotating cast of fellow YouTubers. Promising something special for the final day, Oakley revealed a collaboration with Glee’s Darren Criss, one of his favorite celebrities and a frequent topic of Oakley’s vlogging.

“I’ve been a fan of Darren’s for years and years now,” Oakley told the Daily Dot. “We’ve always interacted on the [red] carpets. We kind of go way back and we always keep crossing paths. Last year I had my finale with One Direction, and I thought, ‘What is the one person for me that would be another culmination of my YouTube career,’ and that would have to be Darren. He’s been a staple of a lot of the stuff I’ve talked about. I thought it would be an amazing way to put an endcap on all the amazing stuff that is Auguest.”

Criss has some YouTube experience of his own as part of Team Starkid, the theater group he founded with his college friends after their Harry Potter parody musical went viral in 2009. He flexes his YouTube muscles admirably here, and Oakley says he wasn’t surprised by any of Criss’s answers, save for one — finding out when Criss found out about Oakley. He had assumed it was when he began talking about Criss widely in his vlogs, but that’s not the case.

“He had found me long before then, doing something very, very embarrassing,” Oakley said. “I did a video recording myself doing “The Witch’s Rap” from Into the Woods. He found it, I never knew he even saw it. I was so embarrassed. He’s got such a theater background that he appreciated it.”

Oakley said working with Criss was a breeze, but that the biggest challenge in the video was Criss’s penchant to talk a lot.

“The thing about Darren is, he could just talk and talk and talk to explain himself,” Oakley laughed. “One of the challenges for the games was you had to answer these rapid-fire questions with no explanations. He could not do it for the life of him.”

Oakley boasts 5 million YouTube subscribers and 3 million Twitter followers, metrics that put him above Criss’s digital reach. Of course, Criss has a variety of platforms that amplify his celebrity, including his songs and an internationally distributed hit TV show. The juxtaposition and subsequent collaboration of the two stars is a sign of how media is continually changing and adapting to fit the new digital reality.

“We come from such similar backgrounds, but took such different paths, and yet somehow found ourselves together again making a video,” Oakley explained. “This is where the entertainment industry is. The traditional and new media coming together to figure out what’s the next step. That’s the finale in a nutshell.”

Auguest is more than just a big-name celebrity appearance. It’s 19 other videos across each weekday of August, documenting collaborations with YouTube luminaries like Jenna Marbles and Oakley’s own mother. Oakely filmed the videos over a two-month span, but has been planning the event for much longer.

“For the past year, I’ve been taking notes in my phone,” Oakley said. “It’s hard to keep things fresh and exciting for the audience. Then when I came up with the ideas, I’d think, ‘Who would I have fun doing this with?’ For example, for the photobooth challenge it needs to be someone who cracks me up, and there’s nobody better than Miranda [Sings] for that. We’ve been wanting to collaborate but she’s been on tour and I’ve been abroad. Knowing we were going to do that together, it was the perfect synergy.”

For each collaboration, Oakley said he took into account his history with the YouTuber, what their fans want from them, and what he’ll ultimately enjoy.

“When it came to a collaboration with Dan [Howell], I knew I wanted to do something completely new,” Oakley said. “He and I have never collaborated, but we’ve been each other’s most requested collaboration for years. With Connor [Franta], I wanted to do something where I’d have fun doing it with the cameras off, because he’s one of my best friends. With Mamrie [Hart], I knew she’d do anything. She’s down to do anything. So we did a puppet show, because why not?”

While the sky’s the limit for collaborations, the time and logistic constraints of a single month of videos means not everyone can fit into the plan. It also meant traveling to the U.K. to work with friends is less of a vacation than his fans might imagine.

“It would be if I had time to chill out and hang with friends, but that’s not the case,” Oakley explained. “I was filming two sets of videos the day I got there, and then another set the next day, and then Summer in the City, and then at night I flew back to America. There was no time for anything except filming. It’s been the busiest craziest, summer of my life.”

Aside from Brits like Zoella, Joe Sugg, and Alfie Deyes, Oakley also tie-dyed with Hannah Hart, and participated in a totally new challenge invented by Korey Kuhl—the poopy diaper challenge—which he hasn’t seen emulated yet. (“I think people are intimidated by the concept,” he said.) He also managed to fit in Troye Sivan, one of his fans’ most requested collabs, for the penultimate video of the week. The pair recently won a Teen Choice Award for their “Boyfriend Tag” video, and this time they had their own Ghost moment with a kids’ pottery wheel.

There’s no rest for the ambitious, and Oakley says he’ll kick off September with two major announcements on Sept. 2.

With a little prodding, Oakley revealed hints about what directions the projects will take.

“They’re ways that I can be a part of people’s everyday lives in another way,” he explained. “And then another project is a way for me to meet more people than I’ve ever met before that have supported my life.”