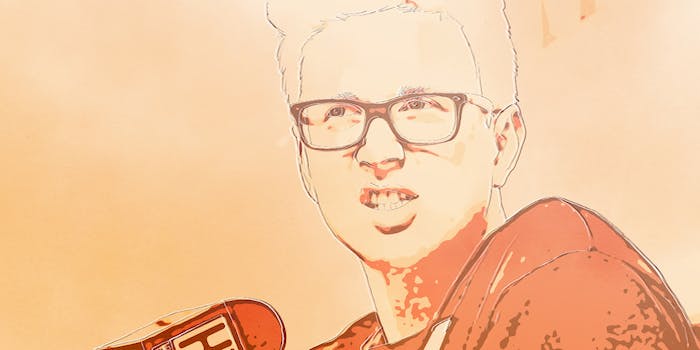 Under the covers: A dispatch from Tyler Oakley’s book tour

In December he’ll cap off the year with a documentary, 'Snervous,' under Awesomeness Films.

Tyler Oakley is not exactly sure how many days he’s been on the road, but he does know he’s not heading home any time soon.

That’s understandable when you consider the year Oakley’s had. The 26-year-old YouTuber has made a habit of keeping busy in 2015, with a tour that brought him, pajama-clad, to cities around the world showcasing his video style IRL. His first book, Binge, hit No. 2 on the New York Times bestseller list in its first week, and it’s what has him not sleeping in his own bed for much of October on the road to support its release. He’s hosted the Streamy Awards live on VH1, defended the honor of digital creators everywhere, and become one of the official public faces of YouTube in the platform’s media campaign. In December he’ll cap off the year with a documentary, Snervous, under Awesomeness Films. 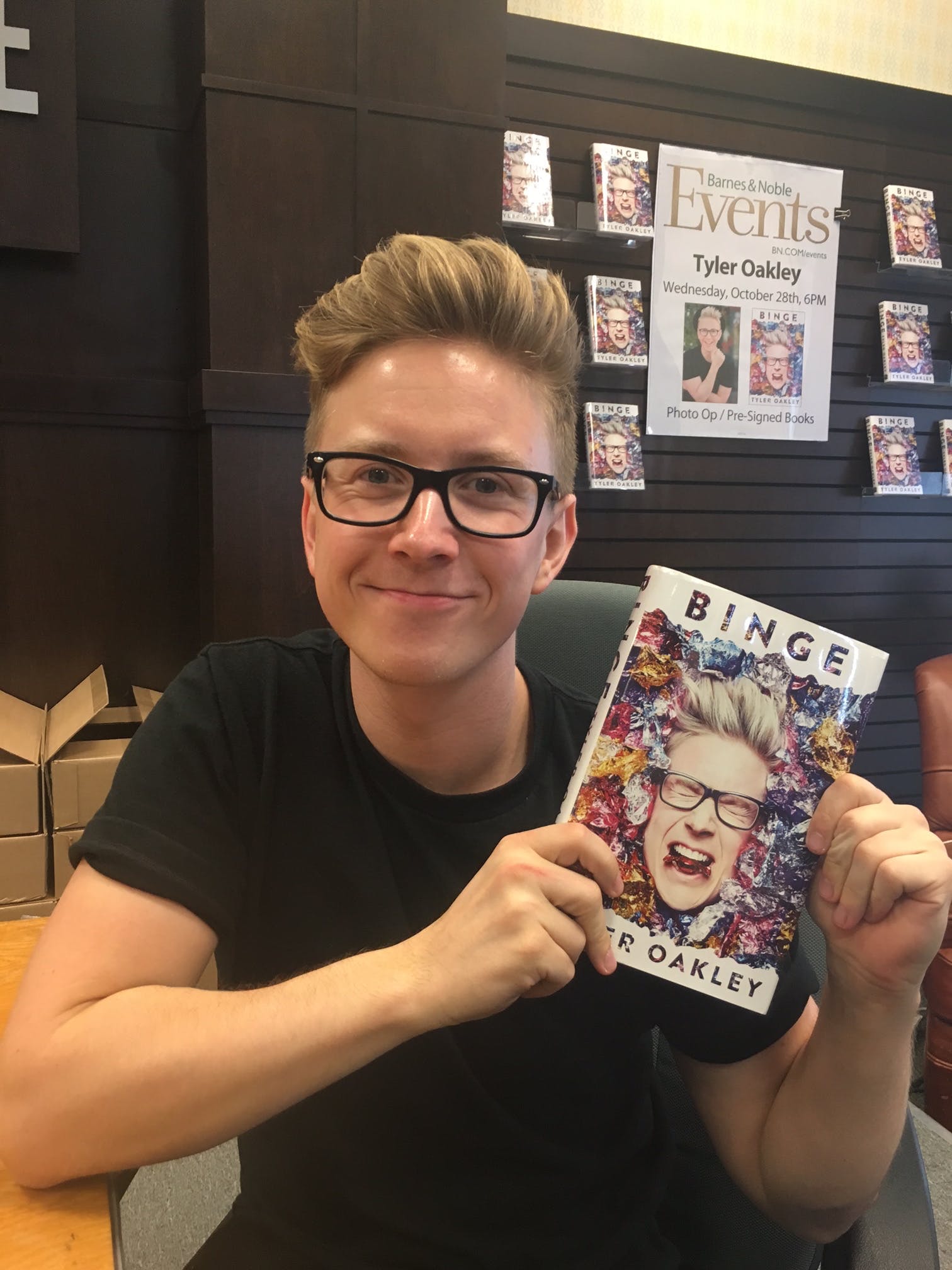 As his team works efficiently to get him through signing over 500 books for his last American in-store event at Los Angeles’ The Grove, Oakley keeps up with questions about his latest endeavor and how it’s different from his last tour, hand flying at his practiced scrawl all the while.“It’s interesting because with the Slumber Party Tour, it lent itself to being kind of a younger crowd, and the book is a lot more adult,” Oakley explains. “I see high school students, college students, parents coming to the meet and greets without kids.”

As for the kids who might be reading his racy tales of Grindr hookups and accidental drug use, Oakley laughs that he’s no one’s parent and it’s not his business to decide what a youngster gets to read. For him, he’s mostly focused on the relief of finally having his words out there in the world. As someone who’s built his brand on the immediacy of the social media world and videos and podcasts he can record and turn around within hours, Oakley says a book was a great departure.

“It’s been the slowest build-up and countdown to coming out compared to anything I’ve ever done,” he laughs. “To finally have everything out there and to have the reaction out there and see the reviews, it’s been really refreshing. Even if it’s kind of critical and negative, even just to hear what people think, that’s all that I wanted. It’s felt so solitary for so long.”

The experience isn’t so solitary anymore, with between 500 and a thousand fans lining up each night for signed books and a photo with Oakley. They dot the Barnes and Noble, despite being instructed to scatter by security, planning hashtags they want to circulate about their day and snapping pictures with their orange wristbands held aloft. When Oakley moves, Starbucks in hand, from where he’s been signing books next to the children’s section to a more private room to relax before the event begins, fans snake after him, snapping photos and gawking—but relatively respectfully. That might be thanks in part to chapters in his book where Oakley details the darker moments of Internet fame. In particular he recounts instances of fans screaming and hitting a van he was in during a YouTuber event, as well as the pressures and exhaustion he faces in his own career. It’s a side of YouTube that most creators don’t share.

“The best feeling about the last two chapters, where it’s kind of more about the other side of YouTube, has been the viewers reading it and empathizing with it,” Oakley said. “It’s not that they’re feeling like they’re being slighted or I have any animosity toward it. It’s just the truth, and for them to see the other side, I think they appreciate it. I don’t think any other YouTuber has talked about it.

“It’s this fun crazy, hectic moment,” Oakley says of the times when fans are face-to-face with their digital favorites. “But I don’t think a lot of people talk about how it feels about a human on the other side of it. I was really afraid to include that. It’s not that I don’t appreciate it; it’s just something I never expected. And I’m just trying to figure out how to deal with that, the good and the bad.” Oakley didn’t just have fans to worry about with the reception to the book. He also peels back personal history, sharing stories from within his family and from his dating life. While his mother, (Mama Jackie to the fans) has been part of the Oakley narrative for some time on his videos, he’s been more cautious with other parts of his personal life. However, in one of the standout chapters of the memoir, Oakley details his first major relationship, with a boy named Adam from his college with whom he’s still friends.

“I let him read the chapter ahead of time, but I said, ‘nothing will change, I’m just letting you read it,’” he says. “Fortunately he was like, ‘that was so spot-on and I think fair.’ We had dinner the other night after one of the book stops. It was refreshing to talk through everything else, and have those conversations about stuff that’s in the book that’s super private and intimate, that nobody knows even in my life, to have those conversations with them, feels like I’ve shed a burden. It’s totally therapy; it’s cathartic.”

He’ll continue that catharsis with Snervous, his first documentary film that trailed him during his last Slumber Party Tour, and Oakley says it explores the same themes of fame, identity, and relationships.

“The cameras were rolling, even when I was like, ‘please don’t roll the cameras,’” he laughed. “There’s some times where I’m literally asking, ‘do we have to be filming this right now?’ They were very tense moments.”

While Oakley said he felt nervous about including certain moments in the film, after “a lot of conversation,” everything he was worried about ultimately made the movie.

“I’m happy they’re included, especially now that I’m happy I included certain chapters were [included] and I’ve seen the human reaction to human me,” he said. “I think fans will have a very similar reaction to those human moments. In the book there’s not very flattering moments. And a lot of embarrassing and cringe moments. I read it, and I’m like ‘why am I like this?’ Watching the movie, I think the same thing.”

With so much on his plate, Oakley seems to consistently have room for more. He’s characteristically coy about revealing too much of his future plans at any point, since he commands his own media outlet of 7.7 million fans excited for him to break news directly to them, but he does allow that he’d like to do more writing someday, be it a fictional narrative, a children’s book, or something else entirely. He says he’s even got stories on the backburner that are even more adult than he shared this go-around.

“It’s funny, with the first book, there’s so many chapters people were like, ‘hmm, I don’t know if you can put that in a book,’” Oakley joked, noting that even if Binge is more adult than his channel or tours, it’s still PG to him. “There’s plenty left to tell.”