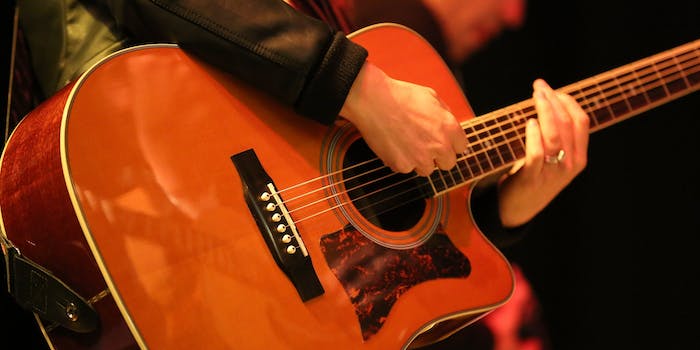 It's a huge step forward for Nashville.

For a genre that generally conjures up conservative imagery and down-home values, country music on the whole took a large step forward Thursday when two singers, Ty Herndon and Billy Gilman, both came out of the closet as gay men, in separate statements.

Herndon, who has long been speculated in Nashville to be gay, despite having been married twice before, came out publicly to People in an interview; telling the magazine that he first wondered if he was gay around the age of 10, and began telling family and friends he was around the age of 20. But, being a country singer—even one that only achieved moderate levels of success—forced Herndon to keep his sexual orientation a secret. Herndon claims that both his ex-wives knew he was gay, though he still struggled through two public divorces, bankruptcy, and alcohol and drug abuse. It was an Anthony Robbins sermon he heard five years ago that made the 51-year-old singer realize that he should publicly come out, on the chance that his story might help other young gay men not suffer as much as he did. Herndon told the magazine that being gay “is just an addendum. I’m a gay man, and I’m looking forward to living the rest of my life authentically and happy.”

Inspired by Herndon’s announcement, 26-year-old country singer Billy Gilman posted a five-minute video on YouTube also announcing that he is gay, and that he had been in a relationship with another man for the last five months. Gilman shared with fans that he was terrified to make the announcement, but seeing Herndon speak so openly inspired him to come out as well, regardless of the impact that it had on his career.

Country music has had far fewer openly gay singers than other American musical genres, and those that are out rarely are the ones who have captured mainstream attention. Back in 2013, alt-country singer K.D. Lang and the more mainstream Chely Wright opened up to The Guardian about the difficulties of being openly gay women in the country music industry. As Wright, who was moderately successful at the time she came out, put it when asked if Nashville was ready to accept a new openly gay country singer, “We’re not there yet. I wish we were, but I can’t see a new gay artist being taken around radio stations by a credible record label in Nashville.”

Wright went on to tell The Guardian that the bigger issue wasn’t necessarily the powers that be that run Nashville’s recording industry—it was fan reaction. “People in the industry—studios, labels, radio programmers—are generally open and understanding, but the fanbase is a different thing. I wouldn’t call the industry homophobic, but they’re afraid of the fear lots of fans have about gay people. So they package us as straight, and we let them. Because we all want to be part of the big game.”

Reactions on Herndon’s Facebook page were somewhat mixed, but for the most part, fairly positive. Gilman received a similar outpouring of support on Twitter, with a smattering of homophobic comments. Country superstar Leann Rimes tweeted in support of both men, claiming the two made her cry with their decision to speak out.

While both Gilman and Herndon haven’t achieved exactly mainstream success, they’re well known in country music genres, and have singles out that are performing well—though it remains to be seen if today’s announcements will give the two performers a lift in sales. While the music industry as a whole is shifting toward being more sexually progressive. Rapper Frank Ocean’s coming out as a bisexual male in 2012 invited support for the most part—except for fellow rapper T-Pain saying that people would choose not to work with Ocean due to his sexuality. Regardless of dissent to Herndon and Gilman’s unveilings, Thursday’s announcements were a major step forward for both country music and the music industry as a whole.

Photo via Cherry Point/Flickr (CC BY 2.0)