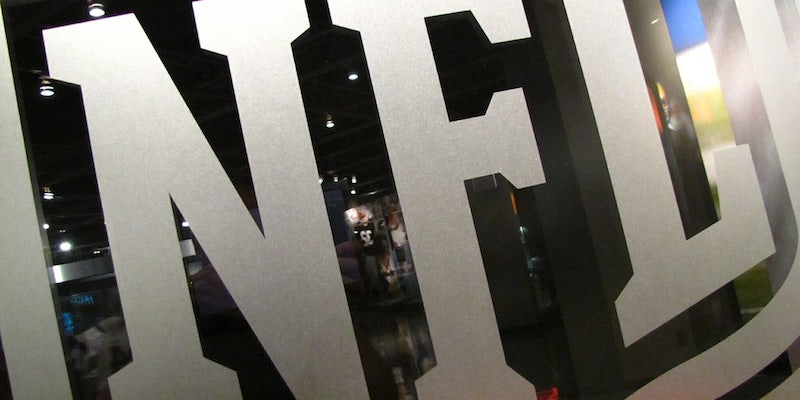 It was a scary moment for websites who showcase NFL highlights.

Two of the biggest sports websites had their Twitter accounts shut down on Monday night, and apparently, it’s at least partially the fault of the NFL.

The accounts of Deadspin and SB Nation GIF—an arm of SB Nation— were shuttered after Twitter said they had violated the Digital Millennium Copyright Act (DMCA). According to Lacey Donohue, the managing editor of Gawker, the culprit was none other than the most popular sports league in this country.

Though Deadspin has since returned to Twitter—SB Nation GIF, as of 11pm ET on Monday, was still suspended—it appears that the NFL wasn’t the only entity targeting these two sites.

SB Nation got suspension notices from Twitter during the World Cup and its accounts have been suspended from Vine http://t.co/xnG3ED4Z12

I've confirmed with Twitter there were several DMCA takedown notices filed against @Deadspin and @SBNationGIF. Not just NFL.

In addition to NFL complaints, UFC filed a takedown notice against @Deadspin. Big 12 and SEC complained about @SBNationGIF.

Soon after its account was taken down, though, Deadspin was back— Keith Olbermann actually let the website commandeer his Twitter account until the site was ready to return under its own moniker—and its first two tweets took shots at NFL commissioner Roger Goodell.

The NFL is the most powerful league in the country, and, even though it seems that allowing GIFs and vines to go viral would only continue to help the brand—nobody is not going to watch the games because there are Vine highlights floating around the Internet—the NFL seemingly doesn’t care.

The league and, I suppose, the networks who broadcast the games would rather protect their copyrights and not allow game coverage to be made into GIFs. Also, take note that the NFL and Twitter signed a two-year deal in August in which the NFL would send to Twitter plenty of video highlights and photos of games while they’re in progress.

Yet, as Awful Announcing wrote:

… the NFL is actually much more restrictive in video rights versus Major League Baseball. MLB has at least shown some forward-thinking behavior in making videos available on their website and YouTube embeddable and utilizing GIFs on social media. The NFL does none of that.  You’d have better luck figuring out what constitutes a catch in the NFL than finding a decent shareable video. The NFL only just this year created a YouTube channel, and even then sharing is disabled by request. The NFL finally discovered YouTube in 2015!! Next they’ll create their own MySpace page.

If it is true that the NFL is behind the shutting down of these Twitter accounts, it’s just another slap in the face of fans who just want access to highlights. …It’s ridiculous that these billion dollar sports leagues fail to realize that the whole purpose of social media is being social, ya know, sharing. …Again, if this is the NFL behind these suspensions, all it is doing here is squashing free advertising of their product.

But the NFL told Politico that it didn’t request for any Twitter accounts to be suspended.

Just got a statement from the NFL re @deadspin twitter suspension: pic.twitter.com/buB6tb3DSH

Parker Higgins, director of copyright activism at the Electronic Frontier Foundation, tells the Daily Dot that this is a potential new normal for fans and reporters online.

“We see this all the time,” Higgins says. “We see that copyright holders have a lot more influence than users on a lot of discussions.”

And that’s a problem here, Higgins says, because “copyright penalties are so much more severe than anything comparable in any other areas.”

He notes that it doesn’t help that Twitter and the NFL have a high-stakes business relationship.

Parker says that this could be an important precedent.

“The frustrating thing is that all of the leagues and the NFL—and MLB especially—have always claimed more rights than their copyright allows them.”

He means the verbose language tacked onto telecasts like “Any rebroadcast, reproduction, or other use of the pictures and accounts of this game without the express written consent of Major League Baseball is prohibited.”

Parker says this type of broad statement of purpose was “always predicated on a maximalist understanding of copyright law that wouldn’t have held up… in court.”

Enter Twitter: “But when you’re talking about services and platforms that you can just convince,” he says, “You might be seeing journalists and fans having to comply with whatever MLB and the NFL can convince Twitter what the law should be.”

This kind of story, involving sports leagues and websites and what constitutes fair use, seems to be far from settled and is unlikely to go away anytime soon.