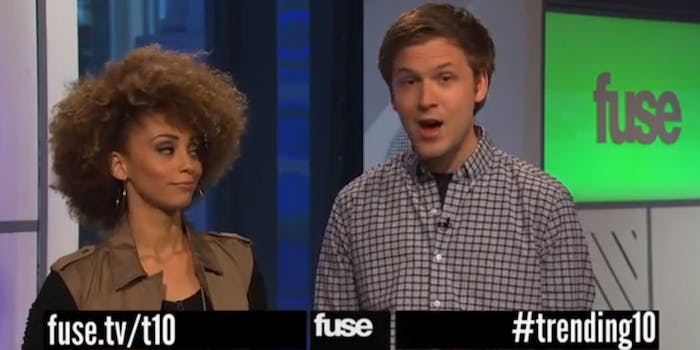 Twitter teams up with Fuse for trending #music TV show

Wondering what Twitter is up to with #music? Here's your answer: A Trident-sponsored TV show called Trending 10. Twitter is teaming up with Fuse to track the most buzzed-about songs and music stories in a new show, Trending 10.

Sponsored by Trident Gum, the show will air weekdays at 7.30pm ET. Here’s how it works: Fuse looks at Twitter trending topics to come up with stories for the show, and you interact with producers via tweets. It’s “a 24-hour-a-day, seven-day-a-week information exchange,” says Fuse SVP Joe Marchese in a YouTube promo video on Trident’s page.

Here’s a look at what the show will be:

A recent study Twitter carried out with Nielsen suggested increased Twitter activity translates to higher ratings for shows among 18- to 24-year-olds.

The announcement of the show comes just after the music discovery app Twitter launched late last week. #music will play a role in determining which songs and stories will be included on each day’s rundown

Producers will use a “heat tracker” tool, which monitors how artists are creating buzz on Twitter. It could flag a new song, photo, or a fan’s tweet. Fuse and Twitter will push out up to 25 stories a day leading up to the show.

Twitter is throwing a lot of weight behind #music. The app helps users discover new and popular music while highlighting Twitter’s overall capacity to act as a discovery engine.

The company seems to be diversifying its revenue streams beyond ads and selling access to data. That’s not to say Twitter isn’t focused on advertising still—a report this week suggested Twitter has signed a deal worth nine figures with an agency representing Walmart, Microsoft, and Coca-Cola.