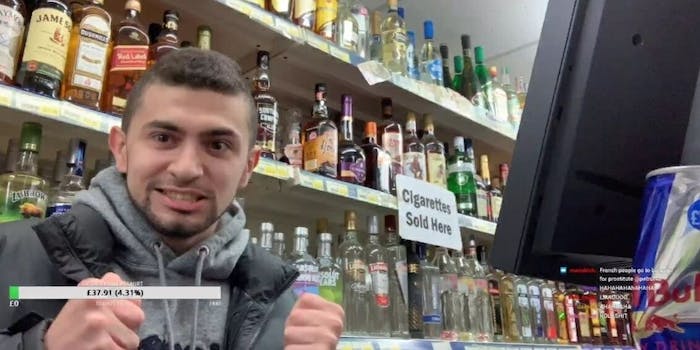 Twitch user Syndrum spends some of his time livestreaming himself as he works his cashier job at the local convenience store. On Thursday, he filmed himself behind the counter, talking about how he’d never get robbed because he’s too tough and because he knows martial arts.

Then, he got robbed.

While sitting by the cash register, surrounded by bottles of vodka and whiskey, Syndrum—who has more than 700 subscribers—gave a short monologue about why the general population would be foolish to mess with him.

“If I’m honest, no one can rob me,” he said. “What are you going to rob me with? A knife? I’ll disarm the knife off them and then just fucking hold them in position so they can’t move. No one can fuck with me. I do martial arts. I’m a pro martial artist. No one can fuck me up. I will fuck them up.”

Exactly six seconds later, Syndrum noticed on his closed circuit TV screen that somebody was trying to shoplift from the store. After giving a short chase and then realizing he couldn’t run after the offender because he was the only one minding the store, Syndrum returned to his camera in a rather angry (and incredulous) mood.

He then showed the video footage of what he called a young kid appearing to nab chips on his way out the door. It was a costumer Syndrum said that “I would have fucked up” if he could have run after him.

If this stunt wasn’t faked in any way, it’s a hilarious look at how karma can strike faster than even the most hardened shoplifter out there. If it was set up, well, it’s still good for a laugh.

Either way, now we’re clear that robbing Syndrum with a knife might not be a great idea. But shoplifting from him when he’s streaming will work to perfection.