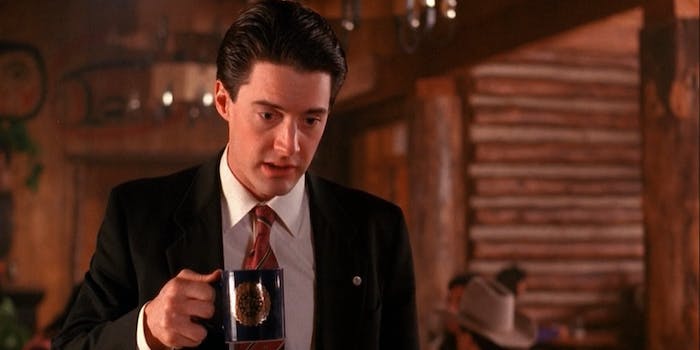 Some damn good news to go with your damn good coffee.

After weeks (and let’s face it, years) of hints and rumors, a Twin Peaks revival is finally happening.

On Monday morning, David Lynch tweeted a link to an enigmatic Showtime video, which was confirmed by Variety to be the the first sign of a new series. According to Variety, the cult show will be returning for nine new episodes, a direct sequel to its two-season run in 1990 and 1991.

The announcement had already been teased by earlier tweets from Lynch, which many fans were already interpreting as a sign that Twin Peaks would be back. For example, last month Lynch met up with his longtime collaborator and Twin Peaks star Kyle McLachlan. Then on Oct. 3, fans spotted these two mysterious tweets from Lynch and Twin Peaks co-creator Mark Frost, seemingly referencing the show. Both tweets were posted at 11:30am, the same time that Agent Dale Cooper first entered the town of Twin Peaks in episode 1.

The new season will reportedly be a self-contained continuation of the original run, written and produced by Lynch and Frost, and with Lynch directing every episode. It will air in 2016, to coincide with the show’s 25th anniversary. Not much else is known at this point, but it’s safe to assume that several of the original cast members will be reprising their roles.