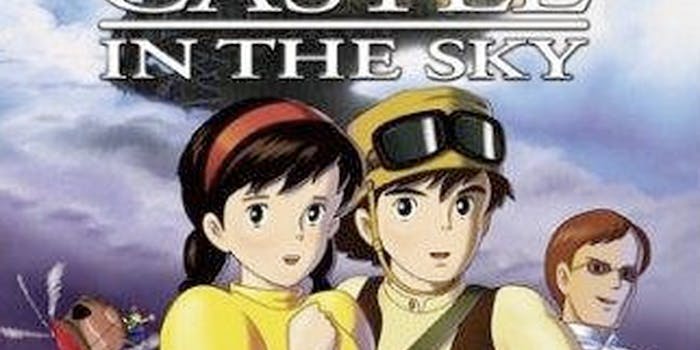 It took a magic spell, a little movie mania  and technology to break this record.

Twitter announced yesterday that its record of most Tweets Per Second (TPS) has been obliterated–surprisingly, by Japanese anime fans watching a rerun of the 1986 classic Castle in the Sky.

The previous record of 8,868 TPS was set when Beyoncé revealed her pregnant belly at the MTV video music awards in August.

But last Thursday, Twitter users in Japan almost tripled that, with a whopping 25,088 TPS.

The reason? It’s partly due to the devotion of the movie’s fans, and partly because of Twitter engineering.

Specifically, the keyword in those tweets is “バルス,” a word that doesn’t translate into English through Google Translate. But Google Translate does suggest that English speakers pronounce it as “Bals.”

The word is the utterance of a spell used in the film’s climax, spoken by the two protagonists to destroy a floating city, destroying a villain’s plans.

Japantrends.com reports that the movie is shown in Japan each winter and that each time it’s on TV, excited fans type the triumphant spell on Twitter.

In the past, fans have actually crashed Japanese social networks such as Nico Nico Doga and 2channel, by  simultaneously posting  this spell on the sites, according to the blog Watashi To Tokyo.

Twitter’s engineers played a role in the record, as well. Japanese is already the second-most commonly used language on the service. The new record is in part due to numbers: more people use Twitter more often, says Twitter spokeswoman Carolyn Penner.

“Essentially, we are growing faster than we’ve ever grown before, across a variety of axes including users, Tweets per day,” she told the Daily Dot. “We are also constantly making infrastructure and other technical changes to allow us to support more Tweets.”