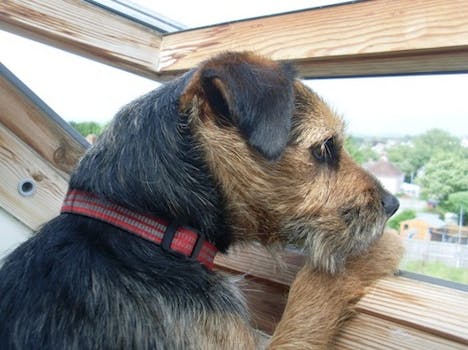 Toby doesn't have to sit, beg or roll over for his treat. He just needs to make sure his dad's on Twitter.

Keeping your favorite furry friend’s food bowl filled while you’re away for a few days used to mean having to hand your key to a buddy and ask him (or her) to visit your place every day. Now, with the advent of Twitter and a little hacking, you can feed your pet pooch with a tweet—and anyone else can too.

Nat Morris, an IT consultant who lives in Wales, has built a dog feeder that’s controlled by Twitter. He can feed his border terrier, Toby, no matter where he may be by simply sending a tweet to a dedicated Twitter account.

Whenever Morris sends a tweet containing the word “feed” to @FeedToby, food is dispensed by the machine he put together.

The machine was created using parts from a printer. Cameras are in place so Morris can make sure the tweet-to-food action works properly. Once the tweet has been sent, the machine kicks into life immediately, with a buzzer sound to let Toby know food is on the way.

Morris told the Daily Dot that the “biggest challenge has been getting the small biscuits to not jam the feeding hopper. We found the best way was to put them in a bag and hit them with a rolling pin first!”

What’s especially cool about this is that anyone with a Twitter account can send the feed command to @FeedToby, and view a photo collage of Toby being fed.

As a fail safe to make sure the feeder doesn’t release too much food, Toby can only be fed once every 15 minutes and only between 9 am and 9 pm GMT.

If you tweet “@FeedToby help,” you’ll find out all the commands that can be sent to the account: about, feed, help, and photo. Tweeting “about” reveals a little information about the dog: “Toby is between 4 and 6 years old (we aren’t sure) and lives in Wales with @natmorris.”

Though Morris admits he’d love to turn the feeder into a commercial project (and has had lots of requests to do so), he simply hasn’t got time to do so at the moment.

Since Morris hit the news with his innovation, his “friends and family have all found it quite funny. Lots of them retweeted and shared the original video on Facebook.”

The most important aspect of Morris’s project though is that Toby absolutely loves it.

“It only took him the first 4 or 5 times of the buzzer going off and a treat falling out for him to realize what it meant,” Morris said. “Now he gets just as excited about the feeder as when the postman comes around.”

When going on a trip, you might forget your toothbrush, but you’ll never need to get a friend to feed your dog while you’re away again.