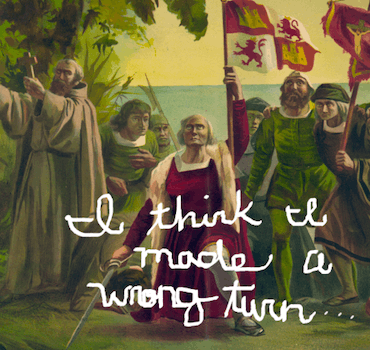 Get historical with Perez Hamilton

History doesn't all have to be black and white. It also can be pink.

Are you tired of all the same boring celebrity news but love the look and feel of gossip sites like Perez Hilton?

Well, there’s a new Tumblr out there just for you. Especially if you love history.

Perez Hamilton is a new Tumblr blog that features gossip news from pre-Revolutionary War America. Like Perez Hilton, the posts are short, witty, and cover topics like the Jamestown fire, the death of Pocahontas, and Christopher Columbus’ discovery of the new world. The site also features the same color scheme, font, layout and poorly-altered images that have made PerezHilton.com infamous and unforgettable.

“Our boyfriend, Sir Walter Raleigh (who plans to colonize the New World), has been thrown into the notorious Tower of London for his alleged involvement in the plotting against King James I,” reads a post from Nov. 19. “Tsk tsk, we thought you were better than that. Get your act together, bb!.”

The blog is less than a week old and features an impressive 27 posts, although most have not collected any comments, reblogs or likes.

The Daily Dot has reached out to the creators of Perez Hamilton and Perez Hilton and is waiting to hear back.

But the creators of Perez Hamilton shouldn’t panic about the slow start. Clever historically-themed blogs and Twitter accounts have been all the rage recently. For example, a Twitter account called @realtimewwII, which updates its followers multiple time each day on WWII events both large and small as if it were 1939, has collected more than 137,000 followers in less than three months.